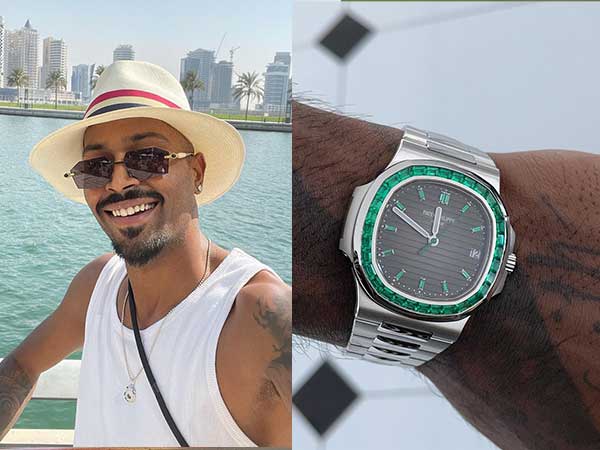 Team India all-rounder Hardik Pandya is one of the most flamboyant cricketers around. He likes to flaunt his style and has some of the costliest brands in his possession. Hardik, who is currently in the UAE for the second half of IPL 2021, was seen in a Rolls Royce Cullinan where he flaunted one of his most prized possession – Patek Philippe Nautilus Platinum 5711.

The timepiece has green emeralds embedded on which has caught all eyes. Meanwhile, the most amazing feature of this watch is that factory setting which puts 32 baguette-cut emeralds on it. It is being reported that the watch is made up of platinum and is worth more than INR 5 crores. The watch carries self-winding automatic movement and also boasts of a power reserve feature of 45 hours.

It is worth highlighting that the 5711 range of this piece is already rare but the color combination which Hardik Pandya chose is rarer.

The Mumbai Indians all-rounder will be next seen in action when the tournament resumes on September 19 in the UAE. The defending champions will begin their campaign against the three-time IPL champions Chennai Super Kings in Dubai.

Hardik Pandya, who resumed bowling in the recently-concluded series against Sri Lanka, will look to get his rhythm back with the T20 World Cup to follow in the UAE and Oman in October-November.

Speaking to New Indian Express, Paras Mhambrey, who is closely working with Hardik Pandya, stated that they are taking baby steps to help Hardik return to the game full-fledged.

“With Hardik, we are obviously slowly taking it forward. I am not going to push him in terms of the number of overs to be bowled. He is pretty much being monitored on how much we are going to push him. We have to slowly build up. The World Cup is coming. For us, knowing that he is going to play a very crucial role for us, it is important to manage his bowling workload very well,” said Paras.