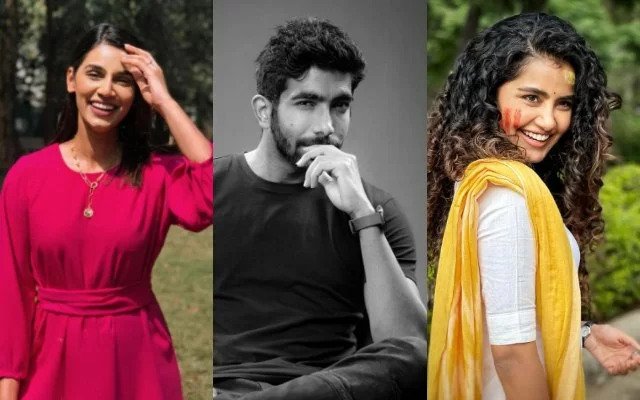 Ace Team India fast bowler Jasprit Bumrah shocked the world when he took a break from the ongoing Test series between India and England in Ahmedabad owing to personal reasons. Later, it was revealed that Bumrah took a leave for his marriage and since then social media has been speculating over his bride-to-be. Actor Anupama Parameswaran and sports presenter Sanajan Ganeshan’s names have poped up so far as Bumrah’s would-be-wife.

Soon after the third Test, Jasprit Bumrah left the bio-bubble and travelled to his home town Rajkot. The Board of Control for Cricket in India (BCCI) released a statement that said that the pacer had asked for leave for personal reasons. A couple of days later, rumours started to float that the 27-year-old had actually asked for leave to get married.

Since the news broke out, Twitter has been guessing who can Jasprit Bumrah’s lucky life-partner. Some reports have suggested Sanjana Ganeshan is likely to be the girl with whom Bumrah will tie the knots. However, there has been no full-proof news as of now.

Meanwhile, a credible report suggested that Jasprit Bumrah was dating a well-known sports presenter working with Star Sports. Since then, Twitter has been speculating that Sanjana Ganeshan could be the lucky one. On the other hand, some cricket fans also pointed out South Indian actress Anupama Parameswaranas there were rumours about her link-up with Jasprit Bumrah earlier.

But, the actress had dismissed the rumours once. But the speculations didn’t die as several sources claimed that the duo had been dating. She became a famous celebrity after her movie ‘Premam’ became a superhit. A couple of other names have also surfaced on social media. Reports also claimed that the marriage is going to take place in Goa.

Bumrah 💫 Anupama getting married ? Apparently she is going to gujarat today 🤔 pic.twitter.com/XmyY6f79ia

Seriously I first guessed some other girl which was wrng…then confirmed it should be sanajana..she is following a lot of wedding related pages now the twist..😐😐😐

Who'll Bumrah marry.
Anupama Or Sanjana Ganesan
It's going down to the wire

Really confused is it

Then Sanjana Ganesan finally support to which Team🙄🙄

If at all Bumrah marries Anupama, I'll have to start liking Anupama😬👍

Wait WTF Bumrah is getting married to Anupama ???

Bumrah and Anupama getting Married ah🙄 Is this rumour still alive?? 🤷

Son tells me buzz that Bumrah is gone for his marriage with actor Anupama Parameshwaran of Premam fame. Well, the new gen is updated 😁😁