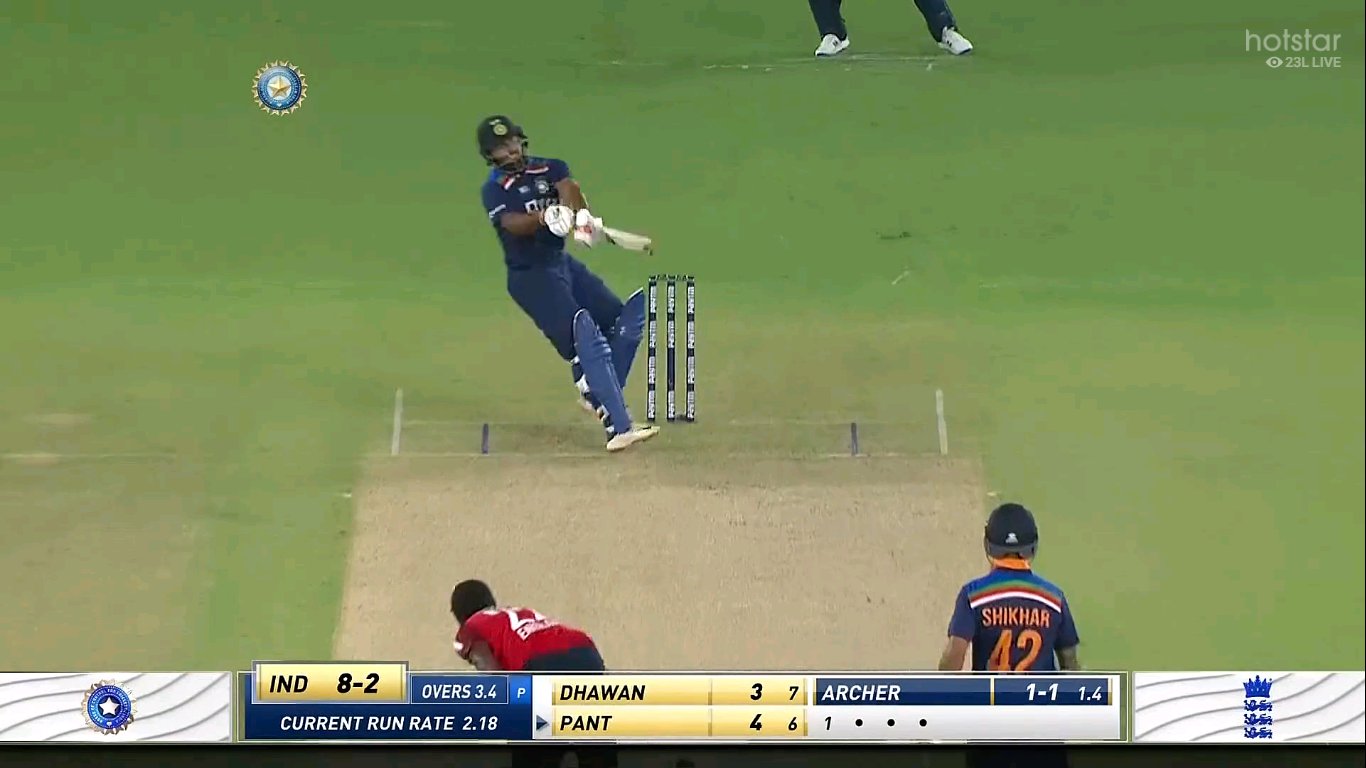 Rishabh Pant and his love for playing unreal shots continue as he once again executed an outrageous reverse sweep shot. This time the bowler was Jofra Archer who is rated as one of the quickest bowlers in the world. However, Rishabh Pant still backed himself and played an unreal scoop shot that went sailing over the boundary rope for a six.

As expected Twitter unanimously saluted the audacity of Rishabh Pant who nailed a reverse sweep after India lost both KL Rahul and Virat Kohli in quick succession. Pant played a similar kind of shot in the Test series against James Anderson but that went only for a boundary. This time that rapid pace of Jofra Archer allowed Rishabh Pant to hit the stroke for a maximum.

The popular micro-blogging site Twitter erupted as soon as Pant hit that reverse sweep for a remarkable six against England’s premier fast bowler. From former cricketers to the fans of the game all showered praises on Rishabh Pant who at present is making batting look ridiculously easy.

Here are some of the best reactions after Pant hit Jofra Archer for a six courtesy off an unreal scoop shot in the first T20I at Ahmedabad:

Also Read: Find Out How Team India Can Become The Number 1 T20I Side After England Series

Holy smokes!
Pant has just played the greatest shot that’s ever been played in cricket.
Reverse sweeping/lifting Archer with a brand new white ball at 90mph for 6.

Reverse laps Anderson for four
Reverse laps Archer for Six
This is Rishabh Pants world
We are just living in it#indvsengt20 #IndvEng pic.twitter.com/34sHYoWtU2

Meanwhile, apart from the Rishabh Pant reverse sweep shot, team India hasn’t had much to celebrate in the first T20I match against England. The hosts are currently reeling at 79 for 4 as Hardik Pandya and Shreyas Iyer are trying to take India to a respectable total. India will need a score of above 150 runs against the might of the England batting line-up. Pant will be disappointed as he failed to capitalize on his start and gifted his wicket away softly to Ben Stokes when he was all set.