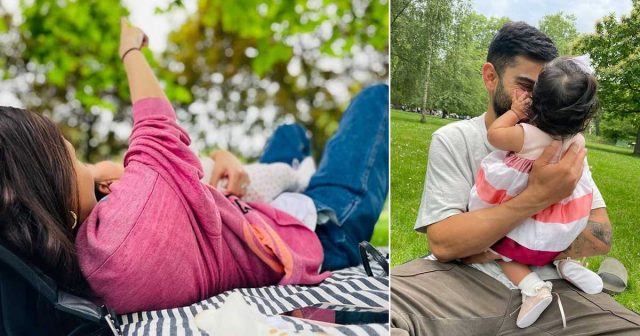 Before this Anushka Sharma was seen taking a walk with Vamika on the streets of the UK. Anushka Sharma has shared cute pictures of her baby. In the pictures that Anushka shared, Vamika is seen spending quality time with her parents. We can also see a glimpse of her birthday cake in the post.

Anushka wrote, “Her one smile can change our whole world around! I hope we can both live up to the love with which you look at us, little one. Happy 6 months to us three.”

Previously, Anushka was spotted taking Vamika for a walk in the UK. In the viral picture, the actress was seen wearing a brown trench coat and had tied her hair in a bun.

Virat Kohli’s daughter Vamika was born in January this year and the cricketer was with his wife at the time of Vamika’s birth. Kohli had been granted paternity leave by the Board of Control for Cricket in India (BCCI) from India’s tour of Australia that had been going on back then.

Virat Kohli was last seen in action during WTC final

Virat Kohli was last seen in action against New Zealand in the World Test Championship Final that India lost. He will now be leading the team against England. India is all set to play a 5-match Test series against England starting August 4th.

After the WTC Final snub, the players will be extra motivated to do well as this series will mark the beginning of the subsequent World Test Championship.