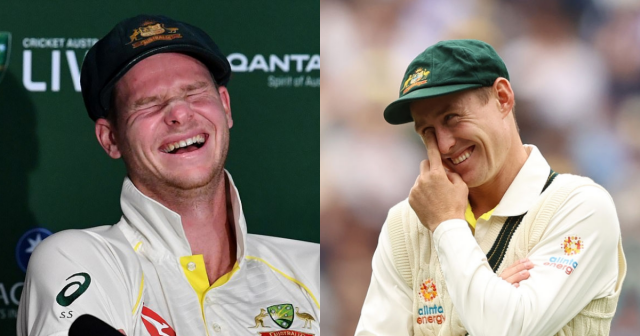 It was another day of Marnus Labuschagne being hilarious on the field, during the fourth Test of Ashes 2021-22 at Sydney Cricket Ground (SCG). On Day 5, Pat Cummins was in great rhythm and England’s Jos Buttler was struggling against the Aussie skipper.

In one of the deliveries during the 83rd over, there was a huge gap between Buttler’s bat and the ball, but Marnus being Marnus, appealed for a caught behind. None of the other Australian players appealed along with him and all of it culminated in a hilarious scenario. Even the commentators said that a bus could pass through that gap between bat and ball.

Let's give Labuschagne an E for Effort on that appeal 😂 #Ashes pic.twitter.com/To5SxDKPMJ

Meanwhile, the 4th match ended in a draw as James Anderson and Stuart Broad survived the nail-biting moments towards the end.

In a twitter Q&A, Marnus Labuschagne was asked to name the best Indian batter and bowler he has faced. In reply, he named the Test skipper Virat Kohli as his favourite batter. Some time ago also, he had called Kohli “The perfect batter” and lauded his cover drive. “I’m gonna have to go with Virat Kohli’s cover drive. I think the way he plays it, the sort of energy that he brings on that ball”, said the no.1 test batsman.

Marnus named the off-spinner Ravichandran Ashwin as the best Indian bowler he has ever faced. Marnus also kept Ravi Ashwin in the list of top 3 toughest bowlers he has faced from around the world. The Tamil Nadu born spinner had picked Labuschagne’s wicket twice during the 2020-21 Border Gavaskar Trophy.

Other two names whom Marnus selected in his top 3 bowlers list were, his captain Pat Cummins and England’s speedster Jofra Archer.

How good is that setup – enjoy guys!! Best intl bowlers i've faced other than Cummins is Jofra & Ashwin