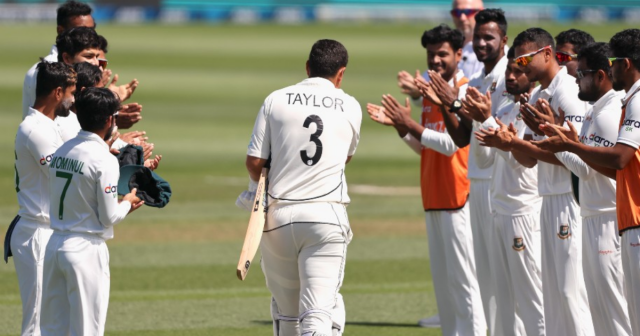 Ross Taylor, who is New Zealand’s highest run-scorer in the longest format, received a guard of honor from the Bangladesh Team as he walked out to bat in the last test match of his career. He came to crease after the fall of the wicket of opener Devon Conway who scored a fluent 109 Runs.
Taylor looked in good touch during his short stay at the crease smashing 4 boundaries in his innings of 28 before eventually getting out to Ebadot Hossain. The Veteran batter  Received a warm reception from the crowd who gave him standing ovation while his better half and friends also cheered for him. The video of the incident was shared on Twitter where the batter could be seen shaking hands with the opposition players.
Watch the video here:
Ross Taylor made his Test debut way back in 2007 against South Africa. Taylor has played 112 test matches scoring 7684 runs at an average of 44.16 including 35 half-centuries and 19 centuries. He also has 3 double Hundreds to his name including best score of 290 runs vs Australia at the WACA.

New Zealand in complete control at end of day 2