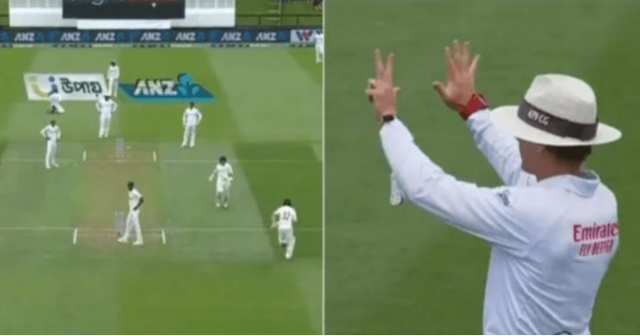 Bangladesh committed a comedy of errors that cost them seven runs on day 1 of the second Test against New Zealand at the Hagley Oval in Christchurch. The Kiwi opener Will Young scored seven runs off one delivery after a blunder by Bangladesh fielder.

The incident took place in the last ball of the 26th over when Young nicked one of last match’s hero Ebadot Hossain to the slip. However, the fielder failed to grab the ball but it deflected off his band to run to the fine leg boundary.

Taskin Ahmed ran a good couple of yards to save the boundary before releasing the ball to the wicket-keeper. However, Nurul Hossain seeing an opportunity at the other end threw the ball but it missed everyone.

The ball went straight towards the boundary. Although Ebadot gave it a chase, it was not enough to stop the ball. New Zealand were awarded seven runs, including four overthrows.

Meanwhile, across the Tasman Sea… ⛴️

Chaos in the field for Bangladesh as Will Young scores a seven (yes, you read that correctly!) 😅#NZvBAN | BT Sport 3 HD pic.twitter.com/fvrD1xmNDd

New Zealand mount on runs over Bangladesh on day 1

The visiting side had to toil hard after asking the Kiwis to bat first at the Hagley Oval. Skipper Tom Latham and Will Young completely dominated the proceedings with the wicket offering nothing to the pacers.

They comfortably played their shots all over the park, notching their individual half-centuries. However, Bangladesh pacer Shoriful Islam provided a breakthrough against the run of play when he dismissed Young after a well made 54.

Since then, it was all New Zealand, who ended the day at 349/1. Latham remained unbeaten on 186 runs while Devon Conway was left stranded one run short of another spectacular century when the umpires called off the day’s play.