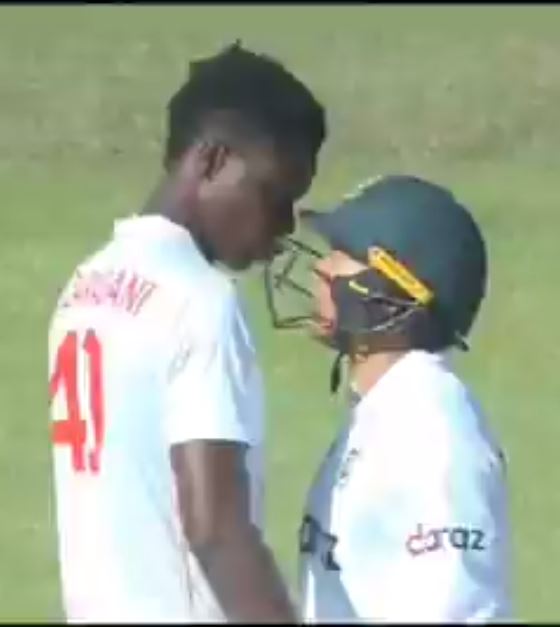 Bangladesh’s Taskin Ahmed and Zimbabwe’s Blessing Muzarabani got involved in an intense stare-down during the first innings. The two nations are currently battling in a one-off Test in Harare. This will be followed by a white-ball series.

On Day 1 of the Test, Bangladesh managed to recover from a precarious position. They were in trouble at 132/6 before a rearguard act from Liton Das and Mahmudullah took them to 294 at the end of the day’s play. The former fell 5 runs short of a well-deserved century.

Bangladesh began Day 2 on a fabulous note. They scored runs at a quick rate and managed to go wicketless in the first hour. In the latest development, they went into lunch at 404/8. While Mahmudullah carried on from his overnight score to score a century, Taskin Ahmed struck his maiden fifty.

There was a dropped chance that went begging early in the day. Apart from that, the Zimbabwean attack has looked fairly toothless.

Taskin Ahmed pulls out a dance move in front of Muzarabani

One incident stood out in the first session. Taskin Ahmed seemed like he was enjoying himself on the field. In the 85th over bowled by Blessing Muzarabani, Taskin showcased some unseen stuff. After playing out a rising delivery, he immediately broke into a dance move. It came out rather beautifully, but the bowler didn’t like it one bit.

Muzarabani walked up to Taskin after his delivery stride and looked down into Taskin’s eyes. Muzarabani also looked like he was trying to do something indescribable with his mouth. Not one to back down, Taskin gave it back and the two had a heated exchange in the middle.

Now this is something!

Muzarabani and Taskin get into each other's faces!

Later on, there were a few other moments where Mahmudullah also lost his cool. The match is at an intense stage and clearly, neither of the teams wants to reel it in since there is a lot of pride at stake.