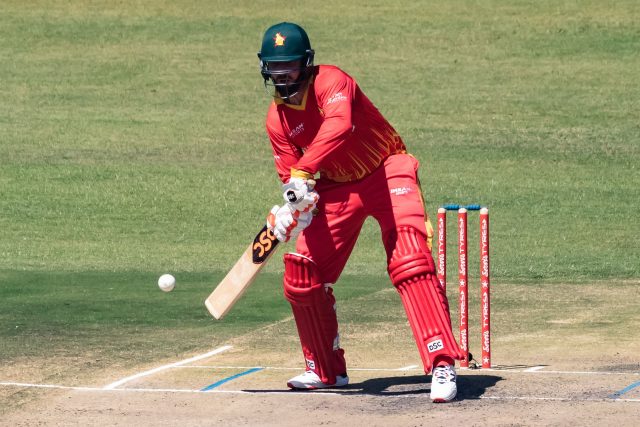 Zimbabwe’s batsman Brendan Taylor was dismissed hit-wicket in an extremely bizarre fashion. The mode of dismissal is already very rare but the Zimbabwean captain found a new way to get out.

During the 25th over of Zimbabwe’s first innings, Brendan Taylor was facing Shoriful Islam. After putting away the first ball for a boundary, a weird incident took place. Taylor tried to ramp the next ball which was bowled quite short. He failed to do so and he tried to shadow practice it.

In his quest to do so, he knocked off one of the bails and the umpire sent it upstairs. Confirmation was received and Brendan Taylor was declared as ‘hit wicket. It will go down in cricketing history as one of the weirdest dismissals ever.

Brendan Taylor out with one of the most ridiculous wickets I've seen in a long time 😭 #ZIMvBAN pic.twitter.com/njQWXHbhTl

The dismissal sparked off debates on whether it was the right call. Many felt it was questionable since it looked like Brendan Taylor was already through with his shot. They suggested it might have been a separate action and not part of the shot. West Indies‘ Oshane Thomas was involved in a similar incident. That time, the event was deemed not-out by the umpire.

Since the decision garnered a lot of attention, the law books were pulled out in order to settle the debate. Here’s what the law says for that mode of dismissal:

35.1.1 – The striker is out hit-wicket if, after the bowler has entered the delivery stride and while the ball is in play, his/her wicket is put down by either the striker’s bat or person as described in Laws 29.1.1.2 to 29.1.1.4 in any of the following circumstances:

35.1.1.1 – in the course of any action taken by him/her in preparing to receive or in receiving a delivery.

35.1.1.2 – in setting off for the first run immediately after playing or playing at the ball.

35.1.1.3 – if no attempt is made to play the ball, in setting off for the first run, providing that in the opinion of the umpire this is immediately after the striker has had the opportunity of playing the ball.

35.1.1.4 – in lawfully making a second or further stroke for the purpose of guarding his/her wicket within the provisions of Law 34.3 (Ball lawfully struck more than once).

35.1.2 – If the striker puts his/her wicket down in any of the ways described in Laws 29.1.1.2 to 29.1.1.4 before the bowler has entered the delivery stride, either umpire shall call and signal Dead ball.