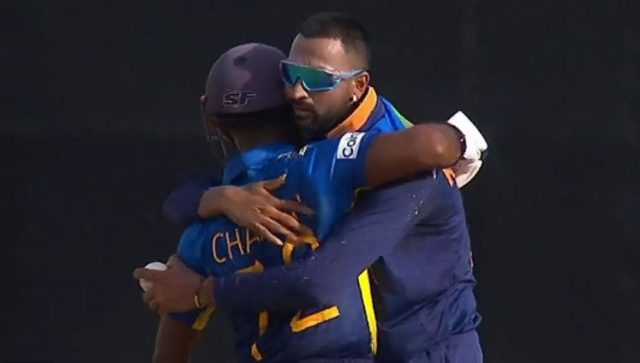 Team India bowling all-rounder Krunal Pandya hugged Charith Asalanka during the Sri Lankan innings in the first ODI. The rather friendly moment sparked wild reactions from Twitterati. Some deemed it to be an effect of playing under Rahul Dravid.

After opting to bat first, things were going rather well for Sri Lanka. Unfortunately, they found themselves in a deja-vu moment, after their batsmen threw away good starts. There were plenty of 40,50-run partnerships but none were substantial.

It was down to a combination of poor shot selection and some tight bowling by the Indians. If it wasn’t for a brilliant 9th wicket partnership between Chamika Karunaratne and Dushmantha Chameera, Sri Lanka would have finished with a sub-par total. However, they managed to add some respectability in the end and set a target of 263 for the Indians.

During the innings, there was one incident that caught the eye of the fans. Krunal Pandya, who has a rather tainted image in the public eye, was bowling the 22nd over. While trying to stop a ball that was hit down the ground by Dhananjaya de Silva, Krunal Pandya almost barged into the non-striker, Charith Asalanka, during his follow-through.

Asalanka managed to get out of the way but Krunal went on to hug the Sri Lankan in a sportive way. This was received rather hilariously on social media. Some users suggested that Rahul Dravid’s appointment as head coach had brought about a change in the dressing room.

Here are a few of the reactions on Twitter:

The discipline, love and care for opponent under Rahul Dravid. pic.twitter.com/U9I8GHpP4Y

You're not a real cricket fan, if you hate this guy !! #KrunalPandya pic.twitter.com/rvwiZDVwnG