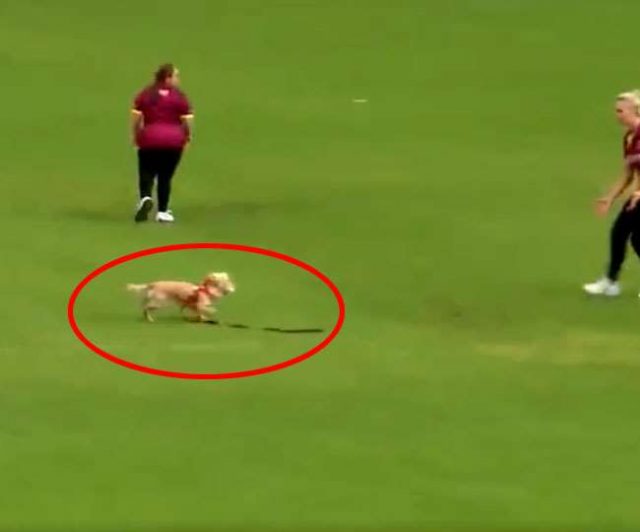 In a cricket match, pitch invasion has become pretty common in recent times. And, who doesn’t know about ‘Jarvo 69’, who has done it several times during India’s Test series against England. However, this time something similar happened in Ireland.

It happened during a women’s domestic match in Ireland when a dog entered the field and had fun with the players in the middle which saw the stoppage of the game as well.

The match was in a very critical position with the batting side needing 27 runs off 21 balls, with 4 wickets in hand. At that time, the batter A Leckey had played the ball down the third-man region and called for a quick two runs. As the fielder chased the ball, a dog came to the pitch surprising everyone.

However, the fielder did chase the ball, picked it up, and threw the ball at the keeper’s end where they had an opportunity to run the batter out. But, the ball got away from the keeper, who threw it back towards the stumps. while her target was missed and the batter got life, the dog grasped the ball and ran away from everyone.

Meanwhile, the on-air commentators also burst out in laughter watching this and they said, “There we go! Dog has stopped play.”

However, the dog eventually stopped at the non-striker’s end where A Fisher sat down and calmed the dog down. She handled the situation quite well whereas the person, who seemed the owner of the dog came there running, retrieved the ball and handed it to the team, and took the dog away as well.

As far as ‘Jarvo 69’ is concerned, ECB and the security personnel faced several backlashes from the fans and he was eventually banned from the ground as well. With the 2-1 lead for India, the fifth and final Test got canceled due to COVID-19.