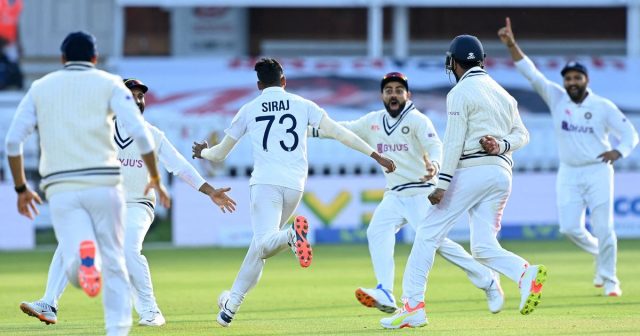 On Monday, August 16, Virat Kohli led India to registered a historic win over England at Lord’s cricket ground London. Meanwhile now India is ahead by 1-0 in the five-match series after the completion of two games. After India defeated England by 151 runs, fans in the United Kingdom were seen celebrating in the UK streets.

India and England had a nail-biting encounter in the second Test match at Lord’s. After winning the toss Joe Root invited India to bat first and the Virat Kohli-led side did an amazing job the in first innings. Especially Indian openers Rohit Sharma and KL Rahul shined as they managed to build a century partnership. KL Rahul even smashed a brilliant century for which he was awarded the man of the match award.

Meanwhile, When teams entered Day 5 all three outcomes were possible. However, the win percentage was slightly in favor of Joe Root’s led side who scored a marvelous century in England’s first innings. Notably, captain Root scored an outstanding 180 not out in the first innings.

English bowlers started day 5 with a bang as they dismissed all Indian main batters and only India’s tail was left. However, in the second innings, India’s tailenders did an exceptional job for the team. As Mohammed Shami (56*) and Jasprit Bumrah (34*) added 89 runs for the 9th wicket to help India post 272 targets for hosts.

Meanwhile, the Indian pace battery was outstanding in the last inning as they managed to bowl out England before 55 overs at the score of just 120. At the end with the contribution of every player, India created history at Lord’s by defeating England.

After India’s victory, Indian fans came on the street to celebrate the victory. In the clip going viral on social media, the fans were seen dancing on Bollywood’s song ‘Saat Samundar’. Also, In the video, fans were seen holding the Tricolour Flag high and were grooving on a famous song.

After India's win against England at Lord’s, people were dancing on ‘Saat Samundar’ on the street in UK.#IndvsEng #ChakdeIndia pic.twitter.com/AEBymae1S8