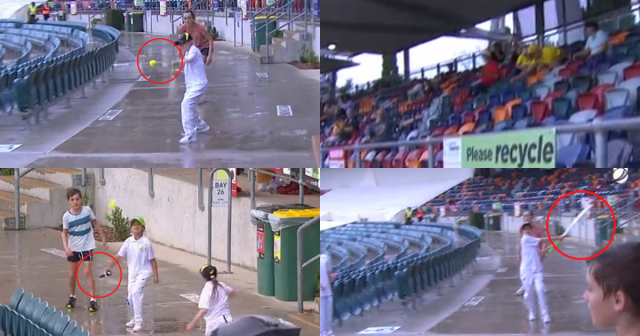 As the match was paused due to rain on Day 3 at the Manuka Oval, some kids in the stands were seen playing cricket with a plastic bottle instead of a bat. The former Australia women’s cricketer turned commentator Melanie Jones, won hearts when she handed out a brand new Kookaburra bat to the youngsters. She even participated in the game with the girls. The video of Mel’s kind gesture has gone viral on social media.

Australia And England Settle For a Draw

Talking about the match, Australia declared their second innings at 216/7 to give England Women a target of 257 in 48 overs. The England batters accepted the challenge and came really close to the total. In the final two overs of the day, England needed 13 runs and Australia needed one wicket. All four outcomes were possible.

It ended up being one of the most dramatic drawn matches ever in Test cricket as Kate Cross and Sophie Ecclestone ensured that England does not lose the final wicket.

Here are some of the twitter reactions to the epic match:

What a finish that was. Absolutely great for test cricket 🏏 #Ashes

Thrilling draw in women’s #Ashes Test. Sometimes a draw can be the best advertisement for the longest format. Great fightback by Eng in first innings thru Heather Knight, sporting declaration by Aus, spirited chase in the 4th innings and a result that does credit to both teams

There are days when no team deserves to lose. And that's why Draw is counted as a result in Test Cricket. Today was one such day. Well played both @AusWomenCricket and @englandcricket women 👏🏼 #Ashes pic.twitter.com/Yjzhe9t7q8

Well played Meg Lanning, Heather Knight and both teams. In just 10 sessions (not because of it), they've engineered an excellent, compelling Test. More of it, across five days. And also, crucially, time for multi-day domestic women's cricket. Let this be a springboard. #Ashes

We have now witnessed two close exciting Women's Test matches in the last seven months.. first, the drawn encounter #EngvInd at Bristol in June 2021 and now this #Ashes #AusvEng Test at Canberra.
Also the day-night Test #AusvInd at the Carrara Oval in Sep/Oct 2021.

If this isn’t the advert that we should have more of it, I don’t know that is..#WAshes pic.twitter.com/kLAlcpZ3Rd

The match bolsters the case for future women’s Test matches to be played over five days instead of four, as it can help in obtaining more results in Women’s Tests thereby increasing the interest of spectators to watch these games. Earlier in June 2021, the thrilling one-off Test between India and England had also ended in a draw at Bristol.

Australia and England will now face off in a three-match ODI series starting from February 3.