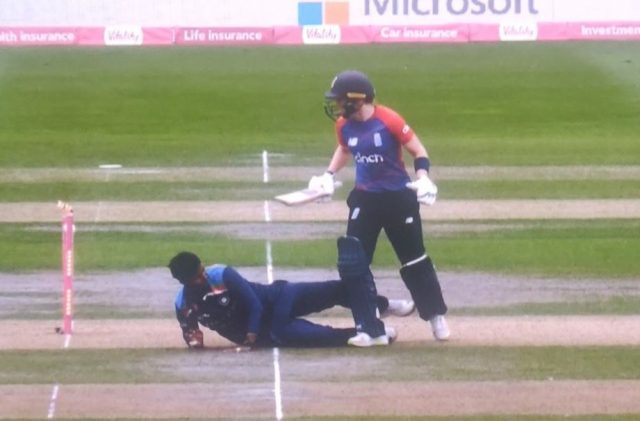 During the second T20I between England and India, Heather Knight was at the receiving end of an unfortunate run-out. Following the dismissal, India was able to come back into the match and go on to win it eventually by eight runs.

During England’s chase of 149, the equation was brought down to 44 runs from 42 balls. Amy Jones was on strike with Deepti Sharma coming into bowl. Jones tapped the ball down the carpet where Deepti tried to stop it. In the process, she put Heather Knight, who was outside the crease, into a tangle. The ball clipped Deepti’s boots and went on to knock the bails off.

The Indian players appealed immediately knowing what exactly had transpired. The decision was sent upstairs and the third umpire took a sufficient amount of time to come to a decision. Finally, he decided there was enough conclusive evidence to term Heather Knight as a run-out and she had to walk back to the pavilion.

Law 41.5 states: “It is unfair for any fielder wilfully to attempt, by word or action, to distract, deceive or obstruct either batsman after the striker has received the ball. It is for either one of the umpires to decide whether any distraction, deception or obstruction is willful or not.”

The run-out was a major moment in the match as Heather Knight was the only set batsman at the crease. Following her bizarre dismissal, England crumbled under sheer pressure. At one point, it seemed like they were cruising towards a series win. But T20I being a fickle game, all it needed was one moment of fortune for the Indian women to script a turnaround.

The two teams will now head into the final T20I that will decide the winners of the series. It will be played at the County Ground in Chelmsford on the 14th of July. England will still go into the decider as favorites despite the loss in the second T20I.