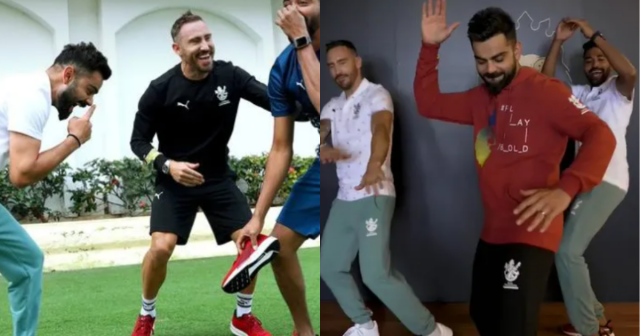 Royal Challengers Bangalore (RCB) have had a great start to IPL 2022. They are currently placed at the third spot in the points table with three wins in four matches. In a recent video posted by PUMA (official kit partner of RCB) Cricket- Faf du Plessis, Virat Kohli and Mohammed Siraj were seen displaying their dance moves.

Siraj’s performance was liked by fans the most. The pacer can be seen fully enjoying himself in the 18-second clip. The video clip has gone viral on social media.

Earlier, the trio was spotted showing some dance moves on the field as well, ahead of their game against Rajasthan Royals on April 5.

Meanwhile, Virat Kohli (INR 15 crores) and Mohammed Siraj (INR 7 crores) were retained by Bangalore ahead of the IPL 2022 auction. Former South Africa captain Faf du Plessis was signed by RCB for INR 7 crores in the auction. Later, he was named the captain of the side.

For the first time in history, Chennai Super Kings (CSK) have lost their first 4 matches of an IPL season. They are currently placed at the bottom of the IPL 2022 points table.

Last year’s orange-cap winner Ruturaj Gaikwad has not played a big innings so far. Ambati Rayudu and Moeen Ali also haven’t looked the same players as the last season. CSK head coach Stephen Fleming admitted that the team is in a difficult position and needs to level up if they want to qualify for the play-offs.

When they clash against RCB on Tuesday in Navi Mumbai, the Ravindra-Jadeja led side would expect to show improvements in all the 3 departments of the game.