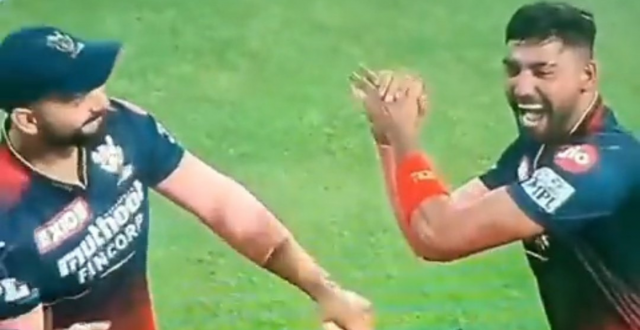 Meanwhile, just before the start of play, the RCB players gathered near the boundary line. It was then Kohli was doing some moves to lighten up everyone’s mood in the camp ahead of a crucial tie.

Speaking of the game, Jos Buttler provided a late impetus to guide Rajasthan Royals to 169 runs in their 20 overs. He accumulated 42 runs in the final two overs and finished with an unbeaten 70 off 47 balls.

In reply, Faf du Plessis and Anuj Rawat got RCB off to a flying start but they lost wickets in a cluster to struggle at 87/5. Just when things were going downslide, Dinesh Karthik yet again played a blinder to lift up the team along with Shahbaz Ahmed.

They forged a 67-run stand for the sixth wicket to set up the run chase. Although Shahbaz got out after a well made 45, Karthik ensured Bangalore go over the line with five balls to spare. Harshal Patel launched a big hit off the first ball of the 20th over to see the team through.