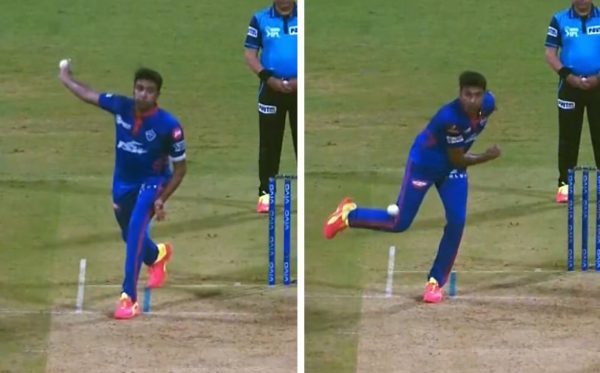 Delhi Capitals off-spinner Ravichandran Ashwin was seen copying Kedar Jadhav during their IPL 2021 game against Chennai Super Kings at the Wankhede Stadium in Mumbai. However, Ashwin didn’t have a great game as comeback man Suresh Raina took him for cleaners as he returned with figures of one for 47 from his quota of four overs.

Chennai Super Kings were in early trouble losing two wickets after Rishabh Pant asked them to bat first. But since Suresh Raina came out at the expense of Ruturaj Gaikwad, he was all over the Wankhede Stadium. He made a grand comeback to the IPL sphere after missing IPL 2020 in the UAE with a half-century and propelling Chennai to a steady score.

Ravichandran Ashwin does a Kedar Jadhav

In that process, Raina belted Ravichandran Ashwin for a couple of six which compelled the veteran spinner from Tamil Nadu to bring out a trick or two from his kitty. Ashwin was welcomed to the attack with consecutive boundaries in the 5th over by Suresh Raina before Moeen Ali did the same in his next over. With nothing going in his favor, Ravichandran Ashwin proceeded to do a Kedar Jadhav as he delivered the ball with a lower-arm release which garnered a lot of reactions among the fans.

Banking on a half-century from Rishabh Pant and quickfire knocks from Moeen Ali and Sam Curran, Chennai Super Kings posted 188 runs on the board; however, it was not enough to secure them a win. Chasing a total with an asking rate of almost 9.5 runs per over, Shikhar Dhawan and Prithvi Shaw stamped their authority from the very first delivery.
They added 158 runs for the first wicket before Rishabh Pant finished the proceedings with a boundary and marked his IPL captaincy career with a win against his apprentice – MS Dhoni with eight balls to spare.