Team India opener Rohit Sharma escaped a close run-out after he made it back on time on day 4 of the 3rd Test at the Sydney Cricket Ground. Meanwhile, Australia have set a target of 407 runs in the final innings to go 1-0 up in the Border-Gavaskar Trophy.

Chasing a mammoth total, Indian openers Rohit Sharma and Shubman Gill did an excellent job to keep the Australian pace attack away. They played straight, left the balls outside the off-stump, and the likes of Pat Cummins, Mitchell Starc, and Josh Hazlewood didn’t manage to create a lot of chances. However, the host got a run-out from nowhere but Rohit did enough to get back.

It was a back of a length delivery from Pat Cummins that kept low and Rohit Sharma got beaten due to the lack of bounce. He tried to hack across the line but got rapped on the pads as the ball flew to the fielder at second slip.

For a moment, Rohit Sharma had left his crease and Marnus Labuschagne had a direct hit at the batsman’s ends. The Australians were rejoicing the breakthrough but the replays confirm, Rohit had just made it back in.

Also Read: Ravindra Jadeja Ruled Out Of The Border-Gavaskar Trophy

Meanwhile, speaking about the game, India lost Shubman Gill after the openers added the 2nd 50+ run opening stand in the ongoing Test match. It was a perfect bowling change from Tim Paine and Josh Hazlewood struck immediately on the first ball of his new spell.

Reeling at 71 for one, India are currently 366 runs away from victory. They will require big knocks from Rohit Sharma and Cheteshwar Pujara, who are due for big runs in the series to save the match before going for a win on the fifth day of the contest. Incidentally, Pujara earned a lot of criticisms for his strike-rate in the first innings and will be pumped up to give a fitting reply to the critics with a big knock. 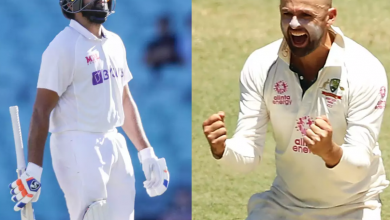