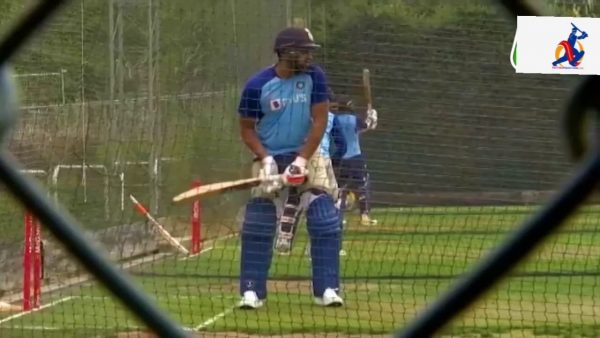 Rohit Sharma is all set to return to Team India’s playing XI for the 3rd Test against Australia at the Sydney Cricket Ground starting from January 7(Thursday). Incidentally, Rohit missed the limited-overs leg of the tour owing to a fitness issue due to an injury he suffered during IPL 2020.

Meanwhile, there was a lot of drama before Rohit set for his voyage. Rumours floated that the star batsman won’t be able to make in time to be available for the last two Test matches. But Rohit Sharma cleared the fitness test on December 11 at the National Cricket Academy in Bangalore before flying to Australia.

He remained in 14-days quarantine upon landing in the land of kangaroos and joined training from December 30. Since then, he has been seen spending extra time in the nets to tackle Australia’s pace trio of Mitchell Starc, Pat Cummins, and Josh Hazlewood.

On the eve of the 3rd match, Rohit Sharma was seen spending more time in the nets with the throwdown specialists. He was taking side-arm throwdowns with new balls to nullify Australia’s pace attack.

Meanwhile, Rohit Sharma’s return has been filled with drama. After a never-ending saga over his fitness, Rohit reportedly flunked the bio-bubble rules in Melbourne along with four other Indian cricketers. They were seen having dinner in a restaurant without masks after a fan posted an image of the Indian cricketers spending some time in the restaurant.

It stirred a lot of controversies and the cricketers were immediately put into isolation. However, they cleared the coronavirus test before travelling to Sydney with the remaining players in the squad.

As per reports, Rohit Sharma is likely to replace Mayank Agarwal, who has been in off-colours so far in the series. His technique has also come under the scanner after he got out in similar fashion time and again.

The management, however, will want Rohit to replicate the form he showed against South Africa when he was promoted to the top-order in red-ball cricket. This will be his first Test since the day-night contest against Bangladesh in Kolkata last year before he missed the New Zealand tour owing to a finger injury earlier this year.