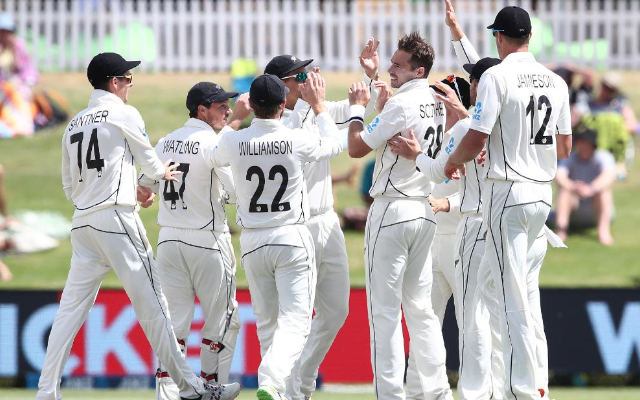 The New Zealand Cricket team wrote a new chapter in their history books as they clinched the top spot in ICC Test rankings for the very first time in history. It all happened when New Zealand beat Pakistan in a final session thriller.

The 1st test between New Zealand and Pakistan went down to the wire as Pakistan needed roughly 150 runs in the final session with Fawad Alam and Mohammed Rizwan nicely set at the crease little did anyone expect that Pakistan’s batting line up would collapse like a deck of cards. It was New Zealand’s Mitchell Santner who gave them the final breakthrough as he dismissed Mohammed Naseem with 5 overs to go in the day.

With the win over Pakistan, New Zealand considered their 5th consecutive win in the test format for the year 2020, all at home. The Kane Williamson led side now has 117 rating points just ahead of Australia who were thrashed by the Indian side as the visiting team beat them by eight wickets at the Melbourne Cricket Ground, levelling the series at 1-1.

New Zealand move closer to the No.1 spot in the @MRFWorldwide ICC Test Team Rankings with a stirring win over Pakistan! They will confirm their place at the 🔝 if they win the #NZvPAK Test series 🙌 pic.twitter.com/ROwKdXhVfo

Also Read: Ben Stokes Unhappy About Getting Selected Into Test Team Of The Decade

Now the only thing the Black Caps will have to ensure is they win the 2nd test against Pakistan if they want to continue to remain at the top of the ICC Test Rankings. The two sides will play the final test at Bay Oval in Mount Maunganui. On the other hand, the Indian team will take on the Aussies in the 3rd Test at the Sydney Cricket Ground starting on the 7th of January 2021.