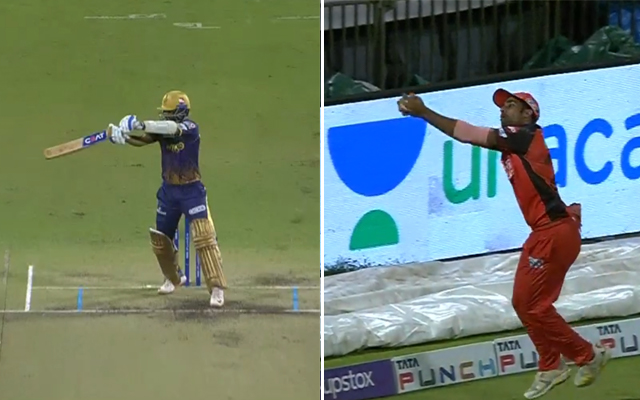 Sunrisers Hyderabad all-rounder Shashank Singh pulled off a stunning catch to dismiss Ajinkya Rahane at the MCA Stadium in Pune on Saturday in the Indian Premier League 2022 season. The Kolkata Knight Riders opener had to walk back to the hut for 28 runs.

Kolkata Knight Rider skipper Shreyas Iyer won the toss and opted to bat first. Venkatesh Iyer and Ajinkya Rahane opened the innings for the franchise. Rahane was struggling with a hamstring injury at the crease. However, he looked in decent touch, as the opener slammed three sixes during his stay at the crease.

In the eighth over, Shashank Singh’s brilliant catch, cut short Rahane‘s innings. Umran bowled a short ball, which was there to be hit. The Kolkata Knight Riders batter uppercut it, using the pace of the ball. However, as the ball seemed to go for a six, Shashank Singh ran to his right, and stretched his hands, to pull an outstanding catch.

Earlier in the over, Shashank had taken another catch to dismiss Nitish Rana. It was again a short delivery from Umran, which Rana tried to scoop it for a six. But Shashank ran in from backward square-leg and completed the catch. The Sunrisers Hyderabad fielder also earned praise from legendary cricketer Sachin Tendulkar, for his brilliant effort to dismiss Rahane.

Catching on the boundary line keeps getting better and better. Outstanding catch by @shashank2191!#KKRvSRH

Kolkata Knight Riders are in trouble after a brilliant start

The Kolkata Knight Riders had put on 55 runs on the board at the end of the powerplay, with Ajinkya Rahane and Nitish Rana at the crease. However, thereafter they have lost three wickets and are in trouble at the MCA Stadium in Pune.

Umran Malik sent back Nitish Rana and Ajinkya Rahane in the same over, and then dismissed Shreyas Iyer in his next. Earlier in the match, Venkatesh Iyer was bowled for seven runs by Marco Jansen. Wicket-keeper Sam Billings is at the crease along with Rinku Singh, with 89 runs on the board and four wickets down for the Knight Riders.

“There Was A Trend To Change The Team”- Virender Sehwag Compares Virat Kohli’s Captaincy...

“There Are Two More Supporters For Mumbai” – Virat Kohli After RCB’s Handsome Win...

“He Could Be An All-Format Player For India”- Sunil Gavaskar Showers...