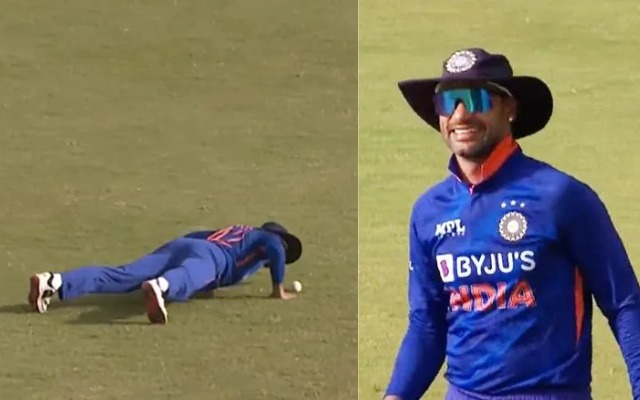 Indian cricketer Shikhar Dhawan is a complete entertainer on and off the cricketing field, be it with his bat or his antics. The left-handed batter was in a great mood during the first ODI against West Indies leading the Indian team on Friday at the Queen’s Park Oval in Trinidad. He doing push-ups on the field, after making a decent diving stop during the second innings.

The incident took place in the 37th over of the West Indies innings. Brandon King punched a delivery from Yuzvendra Chahal to the cover region. Shikhar Dhawan who was guarding the region attempted a dive to stop the ball. Immediately after stopping the ball, he started doing push-ups on the ground.

The incident has left the teammates and the fans in splits. The video of Dhawan doing push-ups has gone viral on social media. It was shared by Windies Cricket on their Twitter handle, captioning it, “Gains and tings. #WIvIND #MenInMaroon”

India registered a three runs victory against West Indies on Friday in the first ODI to take a 1-0 lead in the three-match series. Batting first India put on 308 runs on the board on the back of Dhawan’s 97 runs knock. His opening Shubman Gill and vice-captain Shreyas Iyer also scored fifties in the innings. Alzarri Joseph and Gudakesh Motie picked two wickets each for West Indies.

In reply, West Indies fell three runs short of the target. Needing 15 off the last over, Mohammed Siraj held his nerves to take India home. Kyle Mayers was the leading run-scorer for West Indies in the match with 75 runs. Brandon King, Akeal Hosein, and Romario Shephard also made valuable contributions, however, it was not enough to take West Indies over the line.

The second of the three ODI matches will take place on Sunday, July 24 at the Queen’s Park Oval in Trinidad.