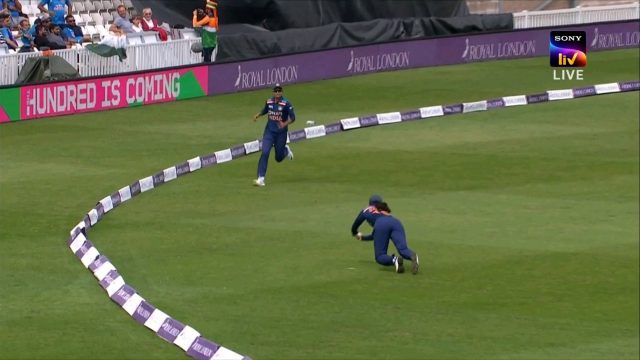 In the first innings of the match, Smriti Mandhana showed her amazing fitness & fielding skills. Smriti picked an excellent catch in the outfield in the over of Deepthi Sharma. Smriti Mandhana was able to execute a perfect dive to dismiss an England batter Natalie Sciver. Also, Natalie was dismissed just 1 run before her half-century, she scored 49 off 59 balls.

The England batting unit looked in very good form in the initial stages of the game. Meanwhile, Smriti’s catch provided a much-needed breakthrough to team India. India succeeded in breaking a partnership and stop England from scoring big runs. After Sciver got out no batter managed to score big runs for the team.

India got a great start from openers Smriti Mandhana (49) and Shafali Verma (19) they had a partnership of 46 off 54 balls. Meanwhile, after ceasing Natalie Sciver before the score of fifty, Smriti too got dismissed by leg-spinner Sarah Glenn at the score of 49. However, the opening partnership helped India a lot in the successful run chase.

Before the game began the match was restricted to 47 overs per side due to rain interruptions. By using the overhead conditions beautifully, Indian bowlers stopped England batters to set a huge target. Deepthi Sharma picked 3 wickets by giving 47 runs. Also, all the bowlers from the Indian side managed to bag a wicket, nobody went wicketless. Also, Sciver (49) and skipper Heather Knight (46) was the top performers for England in the first innings.

When the chase started Mithali Raj played the role of anchor and kept the scoreboard moving. She scored a match-winning boundary on the outside off to help India win the game by 4 wickets and 3 balls remaining.

A moral boosting win for @BCCIWomen and Impressed by the finishing skills of @SnehRana15 in the end and captain @M_Raj03 leading from the front! 3 consecutive half-centuries fantastic performance . Was in control throughout 👏 #Legend #ENGvsIND #MithaliRaj #Respect pic.twitter.com/oiuRBm9R3h