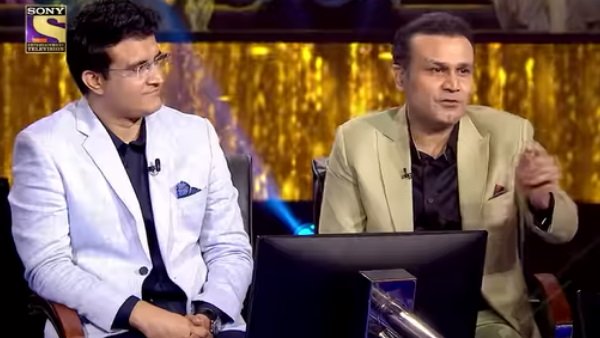 Virender Sehwag and Sourav Ganguly will grace their presence on the sets of Kaun Banega Crorepati next Friday. They will be playing this interesting game for charity hosted by the megastar Amitabh Bacchan himself. Another season of KBC is back on Sony TV and this comes as a great refreshment for the fans of Big B. Meanwhile this Friday, he will host the former Indian skipper and Sehwag who was groomed by Ganguly to become one of India’s biggest matchwinners.

The official Instagram handle of Sony TV shared a clip of the promo of that episode. Sehwag is at his wittiest best replying the answers in great swag and style.

A new addition to the thirteenth season of KBC has been the Shaandaar Shukravar. The Shaandaar Shukravar is a weekly special episode of KBC 13 where celebrity guests from all walks of life will appear on the show to play and win. The winnings will go to the social cause closest to their hearts. Thus this week, Sourav Ganguly and Virender Sehwag will be a part of the show.

During their conversation, Big B is seen asking what will their reaction be when they win against Pakistan. Virender replies that there is a famous dialogue from the 1988 film Shahenshah. As the legendary actor recalls the dialogue, “Rishte main to hum tumhare baap lagte hai ,” Virender cheekily adds, “Hum toh baap hai hi unke,” causing the host to break into laughter.

Meanwhile, the former Indian skipper was recently in London during the second Test at Lord’s to discuss about the future of Ravi Shastri.