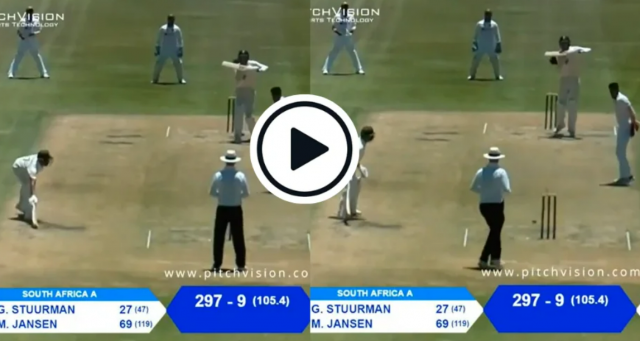 India A are currently playing the second unofficial Test match against South Africa A in Bloemfontein with the third day’s play being stopped due to rain. The hosts are leading by 137 runs in their second innings with the team reaching 116/5 on day three. Ishan Porel led the attack with two wickets with Saurabh Kumar and Baba Aparajith picking one each.

Meanwhile, the game saw a brainfade moment from South Africa A tailender Glenton Stuurman who was run out in the first innings. He backed away way too much and was late to get back to his crease as the ball hit the wicket at the opposite end touching the feet of Porel.

The replay proved that the non-striker was late to get back to his crease at the other end. He took the entire thing a bit casually and plunged his bat in the end, only to find he was short.

India A On Top Vs South Africa A

SA A were all out for 297 as Glenton Stuurman was the last man out, after being run out at the non-striker's end.
A bit of a brain fade from Glenton as he watched hit Ishan Porel's foot and go into the stumps while not attempting to ground his back back in the crease.

“Ohhhh! No way! Oh my goodness. Oh my goodness. Glenton Stuurman has been run out at the non-striker’s end off the boot of the bowler it looks like. This is a massive issue for South Africa” said the commentators on air.

Meanwhile, India skipper Virat Kohli gave an update regarding the future of India’s Tour to South Africa. The tour seems to be in jeopardy after the new COVID variant Omicron is widespread in the African nation at the moment. India are scheduled to play 3 Tests, 3 ODIs, 4 T20s between December 17 to January 26.

“Well, look, it’s pretty natural. I mean, we’re not playing in normal times anyway, so there’s a lot of planning that’s involved, a lot of preparation that’s involved in terms of understanding what’s exactly what’s going on. You know, there are players who are not part of the group right now, who will be in quarantine to join the team in the bubble, to fly in the charter – those kinds of things you want to seek clarity as soon as possible. So we have spoken to all the senior members of the squad. Obviously, Rahul bhai has initiated a conversation within the group which is very important to know because at the end of the day we understand” said Virat Kohli in his press conference in Mumbai.