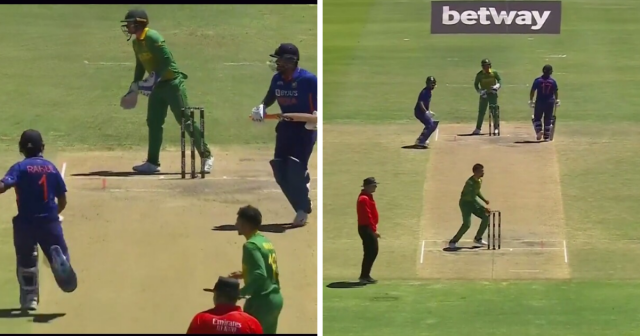 South Africa, who have been pretty neat on the field so far, committed a comedy of errors as India escaped a runout in the 2nd ODI at Boland Park in Paarl. Opting to bat first, India were in a spot of bother losing two quick wickets but stand-in captain KL Rahul and Rishabh Pant revived India to put the visitors on a high.

Shikhar Dhawan and Rahul got India off to another decent start. They added 63 runs in 11.4 overs before Dhawan got out in an attempt to shift gears. His dismissal led to another with Virat Kohli walking back for a duck.

Struggling at 64/2, India were keen to build a partnership with Rahul leading the flag for India. Just when things looked to settle for the visiting side, they were on the verge of losing another wicket but a comical error saved India’s hope.

The incident took place in the 15th over when Rishabh Pant tucked one to the left of mid-wicket and KL Rahul was halfway down when the fielder slid to his left, which forced Pant to abort the thought of a single.

He went back and Rahul reached Pant’s end too. The throw came on the half-volley to Keshav Maharaj who failed to collect and the backup fielder was near deep mid-wicket, by the time he could field and return the ball, Rahul was back and escaped a runout.

He was clearly upset with the turn of events and gave a cold stare to Rishabh Pant before saying something to his partner.

Rahul and Pant soon settled down and kept the scoreboard ticking while the odd boundaries kept coming every other over. The wicket-keeper batsman played a counter-attacking innings while KL Rahul played the role of a second-fiddle.

Pant reached his fifty in style taking on the spinners while Rahul ticked the spinners for ones and two. At the time of writing, India are well placed at 162/2 at the end of 28 overs.