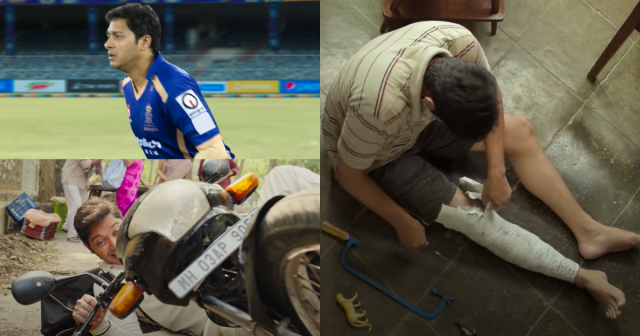 “Age is just a number.” We have all heard this phrase numerous times. In a world that often defines and limits people by age, when one believes anything is possible at any time, there is nothing that can stop him… not even his age. The prime example of this is cricketer- Pravin Vijay Tambe.

The trailer of Tambe’s biopic ‘Kaun Pravin Tambe’ has released on March 10 and it is receiving a lot of appreciation from the fans. 46-year old Shreyas Talpade is playing the role of Pravin in the film.

The trailer starts off by showing a snippet of Rahul Dravid’s speech about Tambe from “The Design for change conference 2014”. Dravid talked about how the story of Pravin Tambe has inspired him even more than the journeys of superstars like Tendulkar, Laxman, Ganguly or Kumble.

The promo shows how a cricketer tries to advance in his career despite family pressure, financial hardships, and other obstacles. More than just a cricketer’s journey to success, the movie looks like the life story of each and every individual who goes out to follow his/her dream. The last scene of the trailer where Talpade tears off the bandage from his leg shows the dedication of Tambe towards the game.

The movie will be released on Disney+ Hotstar on April 1.

Hope the audience is touched and inspired by the film: Shreyas Talpade

Talpade had earlier stated that playing Pravin Tambe’s role was an honour for him.“I will always treasure the time spent with him [Tambe] in preparing for this role which required a new level of dedication and effort from all of us. I hope our audiences not only enjoy the film but are touched and inspired by it.”, he said.

Pravin Tambe is the oldest IPL debutant till date. He played his first game at the age of 41, for Rajasthan Royals.