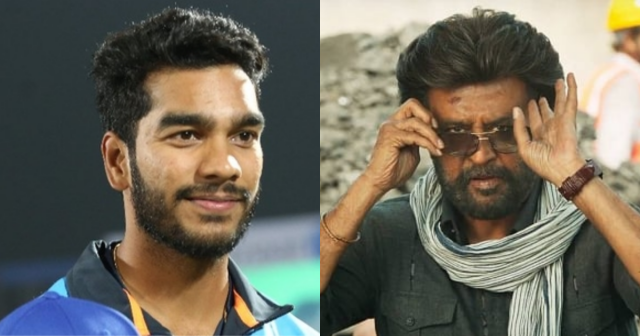 Venkatesh Iyer’s commanding form has continued in the ongoing Vijay Hazare Trophy 2021-22. This time, it was the Chandigarh bowlers who were subjected to his explosive hitting.

With eight fours and ten sixes, Iyer smashed 151 runs in just 113 balls in the Sunday morning fixture. When Iyer arrived at the crease, Madhya Pradesh was in a bit of a pickle. But Iyer helped his side reach a great total by putting up 122 runs with Aditya Shrivastava and 85 runs with Parth Sahani for the fifth and sixth wickets, respectively.

However it was his epic celebration after reaching the hundred which drew everyone’s attention. After reaching the milestone, the Indore-born all-rounder imitated the famous “Salute” gesture of his hero Rajinikanth who is celebrating his 71st birthday on Sunday. He also tried to imitate the iconic way in which Rajinikanth wears his sunglasses in movie scenes.

During the IPL 2021 in a chat with ESPN Cricinfo also, Iyer had talked about the admiration and respect he had for the Tamil Legend. “A Thalaivar devotee. I can watch his movies ‘n’ number of times. He’s a legend”, Iyer had said.

#HBDSuperstarRajinikanth @ivenkyiyer2512 dedicating his 100* in style for Thalaivar @rajinikanth birthday 🔥🔥🔥🔥😭😭

Venkatesh Iyer set to be picked for SA ODIs

Meanwhile in the previous enounter against Uttarakhad, Iyer had made a quick 49-ball 71 and took two key wickets with his medium pace. Before that match, Iyer had blasted 112 off 84 balls against Kerala, and he also bowled a fantastic spell of 3/55. Given his consistency with both bat and ball in the past few months, it is certain that Iyer would be included in the Indian ODI squad for the tour to South Africa in January.