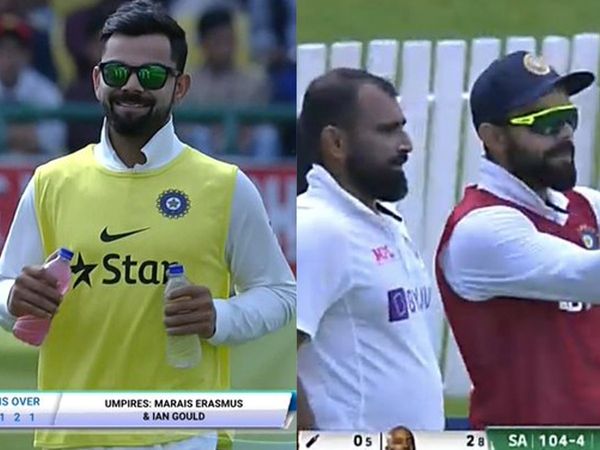 Team India’s Test captain Virat Kohli was seen sharing some tips with teammate Mohammed Shami at the boundary on day 2 of the 2nd Test against South Africa in Johannesburg. Incidentally, Kohli is not a part of the ongoing Test match due to injury concerns.

The visiting side are currently on the driver’s seat with a significant lead of 122 runs. Cheteshwar Pujara and Ajinkya Rahane have struck individual half-centuries and have shown intent to return to form.

Meanwhile, the Indian bowlers had to toil hard to bowl out South Africa in the first innings. During that time, Virat Kohli was seen interacting with Indian pacer Mohammed Shami when the fast bowler was stationed near the boundary ropes during the second session.

Moreover, Virat Kohli also gave a special visit to the South African dugout and was seen talking to a couple of Proteas cricketers. The video was well-received by the fans, who lauded Kohli for his gesture.

Why is Virat Kohli not playing the 2nd Test?

Opener KL Rahul, who walked out for the toss for the first time, revealed that Virat Kohli was down with a “back spasm.” The stand-in captain also added that the physios are working with the talismanic run-scorer to get him fit for the next game, which is due on January 11.

“Unfortunately, Virat has had an upper back spasm. The physios are on him. Hopefully, he’ll recover for the next Test.”

Hanuma Vihari, who has been due for an opportunity, has replaced Virat Kohli in the playing XI. Vihari last played for India during the 2020-21 Border-Gavaskar Trophy, where he soldiered through a torn hamstring and helped save the Sydney Test with a valiant knock.