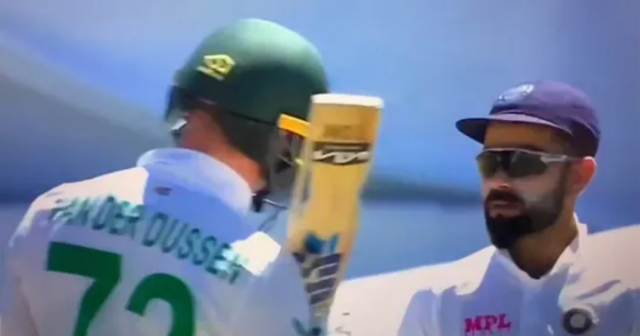 On the first ball of the 37th over of South Africa’s innings, there was a sound heard when the ball crossed the bat of Proteas batter Rassie van der Dussen. Indian captain Virat Kohli went for the review with one second remaining in the timer.

From the replays, it was found that there was a spike in the ultra-edge as the ball passed through the bat, but it was due to the bat hitting the ground. This might have been the cause for the sound as well and hence Rassie was deemed not out.

Kohli was not pleased with the decision again. Kohli first had a brief conversation with umpire Marais Erasmus and then while he was going to stand in the slips, he got into a chat with Rassie van der Dussen. Kohli was heard talking about the last match where there was a controversy regarding Rishabh Pant’s catch of Rassie.

Behind the wickets, Rishabh had taken the catch of Rassie but later in the replays, it was observed that it might have been a bumped catch as the ball had bounced before going into Pant’s gloves. After this, Rassie reminded Rishabh of the disputed catch during India’s batting. This didn’t go down well with Virat and he took a dig at Rassie for sledging a youngster like Rishabh Pant.

Kohli on the stump mic said: “Really? So you go after someone who is five years younger than you? Yeah? And then you are asking me if you sledge Rishabh?”

What will we do without Virat Kohli pic.twitter.com/vg7XPSdEQX

On day 3, Proteas skipper Dean Elgar was granted a huge respite owing to a controversial DRS decision. The Indian players were clearly not impressed and Kohli, KL Rahul & Ashwin made some scathing remarks about the official broadcasters Supersport and Hawk-eye technology, on the stump mic.

Even the umpire Marais Erasmus was shocked after watching the ball-tracker.

That didn't look like it was going to miss the stumps.#SAvsIND pic.twitter.com/0VczdHodtA