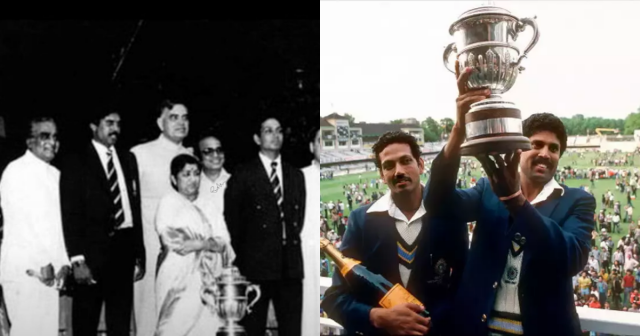 Lata Mangeshkar, one of India’s best singers, was a huge cricket lover. The singer spoke about her fondness for cricket on multiple occasions and often tweeted about the Indian cricket team’s achievements as well. She had deep relations with many Mumbai cricketers.

Players like Sunil Gavaskar, Dilip Vengsarkar, and Sachin Tendulkar talk about her with a lot of humility and motherly respect.

In 1983, India had pulled off one of the greatest upsets in cricket history, defeating the heavyweights West Indies in the World Cup final at Lord’s. Not many people are aware that Lata played a key part in the celebrations, post-India’s victory.

BCCI wanted to celebrate Team India’s triumph. They did not, however, have sufficient funds to do so. Well-known cricket administrator- Raj Singh Dungarpur, then, requested Lata Ji to do a fund-raising music concert at Jawaharlal Nehru Stadium in New Delhi. She agreed and gave a beautiful two-hour performance in front of a packed crowd.

The event ensured that BCCI raised enough funds, and each player of the squad received a cash prize of Rs 1 lakh. The great singer didn’t even ask a single rupee from BCCI for the show. Since then, the BCCI started reserving two VIP seats for her at each venue where India played an international match, as a token of respect.

Lata Mangeshkar Passes Away At the age of 92

Lata Mangeshkar passed away on Sunday morning in Mumbai. N Santhanam, the chief executive officer of Breach Candy Hospital, confirmed the news of her demise. Last month, she was diagnosed with COVID-19 and pneumonia.

During the ongoing ODI match between India and West Indies at the Narendra Modi Stadium, Indian players were seen wearing black armbands in honour of the legendary singer.