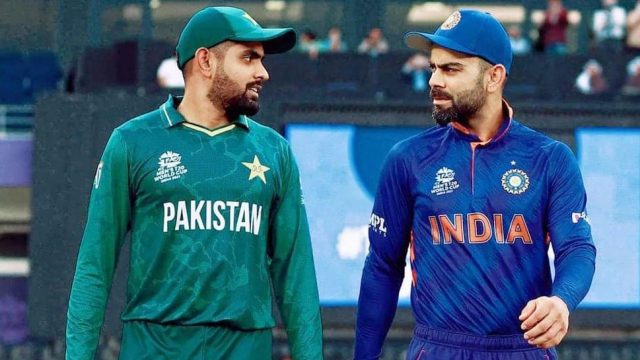 Pakistan captain Babar Azam’s conversation with the talismanic batsman Virat Kohli during the ICC T20 World Cup 2021 earned a lot of attention. Two of the modern-day greats were seen having a quick chat while walking back from the toss.

The clip went viral ever since it landed on social media during the clash of the titans on October 24 in Dubai. Babar Azam has finally opened up on the episode citing that he won’t what transpired between him and Virat Kohli.

“I won’t reveal the discussion in front of everyone,” said Babar Azam as quoted by Samaa TV, when he was asked about what the two cricketers spoke about before the toss.

Meanwhile, Pakistan were the dominant force on that day, thrashing India by 10 wickets to kickstart their T20 World Cup campaign on a blazing note.

“Everything we touched that day turned to gold” – Imad Wasim

Babar Azam & Co scripted history beating India for the first time in the ICC T20 World Cup a couple of months ago. Pakistan star Imad Wasim opened up on what he hailed as a “perfect” win against India in the 2021 T20 World Cup group stage encounter.

In conversation with PakPassion.net, Wasim said:

“It was really good and beating India always provides some special moments for everyone involved in Pakistan cricket. Of course, I enjoyed the occasion and the match, and the result was just perfect. There was pressure on us, but it was a once-in-a-lifetime opportunity to play against India in a Twenty20 World Cup and I was really grateful for that opportunity.”

While India crashed out of the group stages, Pakistan continued their unbeaten run to reach the semifinal before bowing out of the competition losing to Australia in the semifinal.