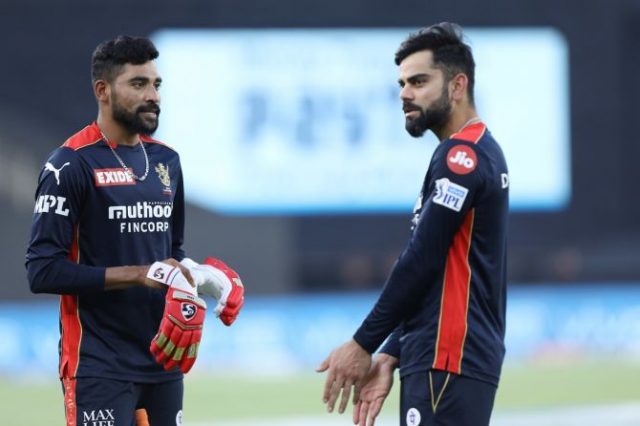 Young India pacer Mohammed Siraj has penned a heartfelt note for Virat Kohli, who recently stepped down as India’s Test captain. Kohli’s decision came one day after India went down against South Africa in the three-match series.

Kohli had earlier stepped down as India’s T20I captain after the T20 World Cup before being sacked from the one-dayers while picking the ODI squad for the Proteas series. The 33-year-old stepped away as India’s most successful captain with 40 wins in 68 Tests.

Wishes have poured from all sections of the society across barriers. Recently, Mohammed Siraj, who debuted under Virat Kohli also penned an emotional note for the latter. Taking to Instagram, Siraj wrote:

“To my superhero, I cannot be thankful enough for the support and the encouragement that I got from you. You have always been my great brother. Thank you for trusting me and believing in me for all these years. For seeing the great at my worst. You will be always be my captain King Kohli.”

Incidentally, Mohammed Siraj first bursts onto the scene in the IPL, playing for Royal Challengers Bangalore in the IPL under Virat Kohli. His stocks went higher and gained success under Kohli in the red-ball format of the game.

“Everything has to come to halt at some stage and for me as Test Captain of India, it’s now” – Virat Kohli

Virat Kohli first led the side in Test cricket in 2014, against Australia, and has primarily held the role since then. His last game as captain was the Cape Town Test in South Africa, which India lost by seven wickets.

Kohli made his announcement on the microblogging site Twitter. He wrote:

“7 years of hard work, toil and relentless perseverance everyday to take the team in the right direction”, the time had come for him to step aside. Every thing has to come to halt at some stage and for me as Test Captain of India, it’s now.

“There have been many ups and also some downs along the journey, but never has there been a lack of effort or lack of belief. I have always believed in giving my 120 percent in everything I do, and if I can’t do that, I know it’s not right thing to do. I have absolute clarity in my heart and I cannot be dishonest to my team.”