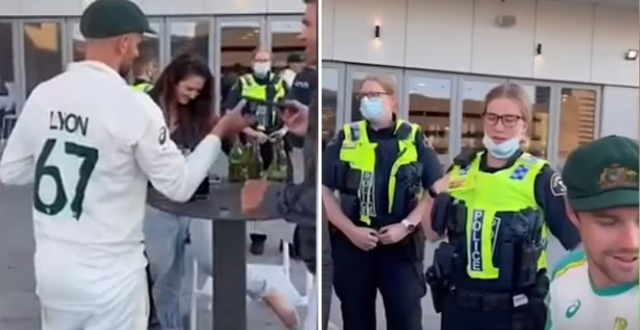 The Ashes series has just finished and Australian and England cricketers reportedly had their all-night party to celebrate the victory. But police had to shut down that as well.

In a video that went viral on social media, Tasmanian police can be heard saying Australia players Nathan Lyon, Travis Head and Alex Carey along with England captain Joe Root to leave the place before dawn as they were partying at the Crowne Plaza Hotel as well.

“You’re too loud and have obviously been asked to pack up,” a female police officer told the group, who were sitting around a table and having a beer. “We have been asked to come. It’s time for bed,” she further added.

While Nathan Lyon and Alex Carey were still wearing their jerseys eight hours after they won the Ashes 4-0, England pace bowler James Anderson was also seen wearing a green hoodie. Notably, as per the report in The Herald, Tasmania Police said that they came after getting a complaint regarding ‘intoxicated’ individuals.

“Tasmania Police attended the Crowne Plaza Hobart on Monday morning after reports were made of intoxicated people in a function area,” the statement read.”The guests were spoken to by police, just after 6:00 am, and left the area when asked. No further action will be taken by police,” it further added.

However, the cricketers left the rooftop as soon as the police arrived as well. However, after their 146-run victory in Hobart, Australian cricketers joined the Barmy Army in a local bar to celebrate their 4-0 Ashes series win over England.