Team India bowler Jasprit Bumrah’s unavailability for the upcoming T20 World Cup 2022 in Australia has become a cause of concern for the management. He has been ruled out of the marquee tournament owing to a back injury. The pacer faced backlash from trolls on social media. He has shared an interesting message on social media, probably aimed at his critics.

Last week, during India’s practice session, Jasprit Bumrah complained of back pain. He was assessed by the BCCI medical team and was officially declared out of the T20 World Cup on Tuesday. Post his injury, the Indian pacer was heavily trolled on social media by fans. Various memes were shared criticizing Jasprit Bumrah for his injury.

Taking to Instagram, Jasprit Bumrah shared the famous quote, “You will never reach your destination if you stop and throw stones at every dog that barks.” 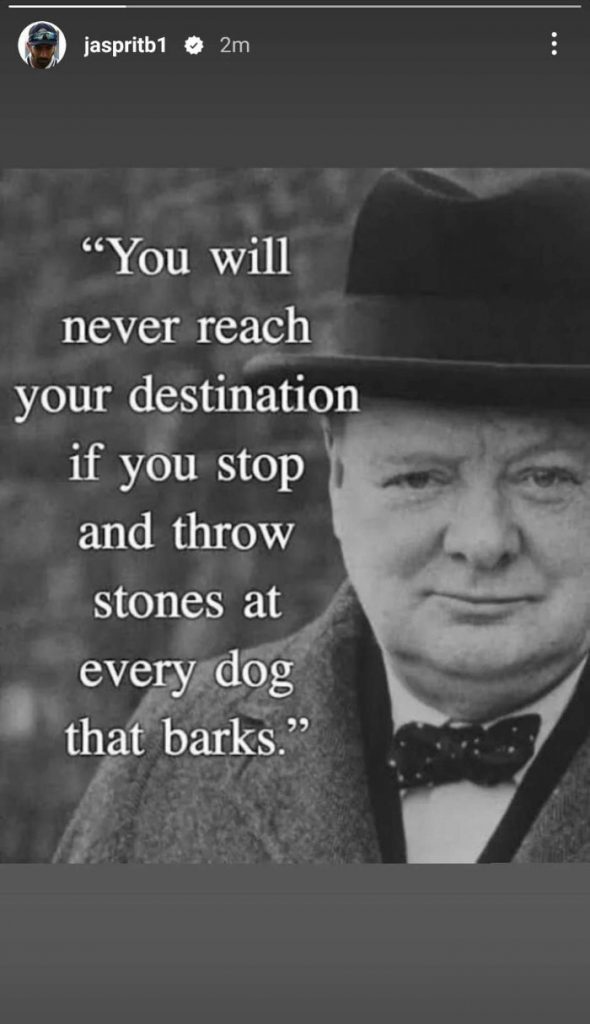 Gutted that I won’t be a part of the T20 World Cup: Jasprit Bumrah

Indian pacer Jasprit Bumrah recently shared a message for his fans on social media. He expressed that he was “gutted” to not be a part of India’s T20 World Cup campaign in Australia. The 28-year-old thanked the fans for their support and added that he will cheer for Team India.

“I am gutted that I won’t be a part of the T20 World Cup this time, but thankful for the wishes, care, and support I’ve received from my loved ones. As I recover, I’ll be cheering on the team through their campaign in Australia,” wrote Jasprit Bumrah on Twitter.

Team India will begin their T20 World Cup 2022 campaign against arch-rivals Pakistan. The clash will take place at the Melbourne Cricket Ground on October 23. Before the tournament, India will play a couple of warm-up matches against Australia and New Zealand.