Chahal posted 3 pictures with birthday boy Rohit Sharma on Instagram. He wrote in the caption: “The love & respect for my Rohitaa Shramaa will always be constant on & off field Found my bade bhaiya 🤗 Wishing you lifetime of happiness, amazing games & good health 🧿 Happy birthday Hitman 🎂.”

Rohit’s wife Ritika dropped a hilarious comment on Chahal’s post. She wrote: “The last picture got me 😒 your photos are more romantic than mine.” Ritika was referring to the picture where Rohit can be seen giving a flower to Chahal.

Chahal responded that even his wife (Dhanashree Verma) agrees with Ritika’s comment. Chahal said: “I’m sure bhabhi my wife also has the same thing to say 👀🤣🤣. 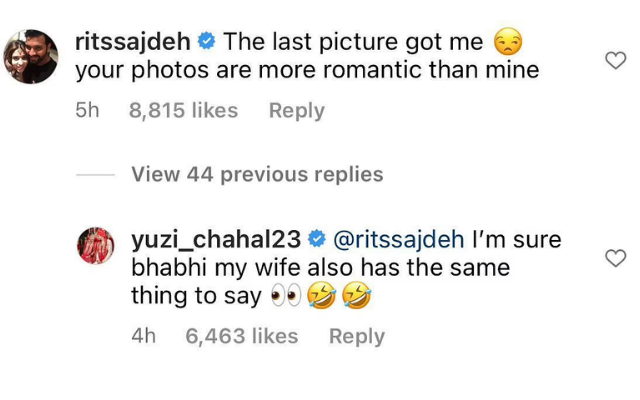 Rohit Sharma and Yuzvendra Chahal are currently facing each other in Match 44 of IPL 2022. Mumbai won the toss and opted to field first.

Yuzvendra Chahal has had a great season so far. The leg-spinner is the current purple cap holder with 18 wickets at an economy of 7. He even took a hat-trick against Kolkata Knight Riders (KKR) and ended up with figures of 5/40 in a high-scoring encounter.