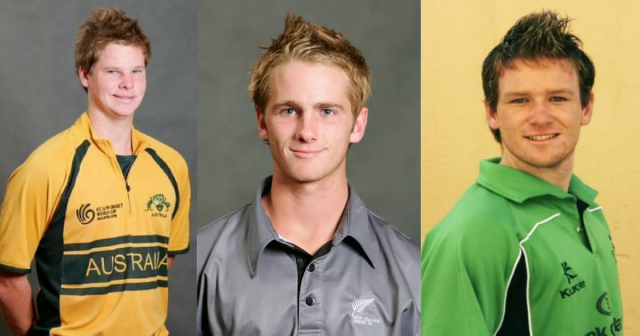 Many players have risen to prominence as a result of U19 World Cups, and have gone on to excel in international cricket. Players like Virat Kohli, Shikhar Dhawan, Cheteshwar Pujara, Rishabh Pant, Ravindra Jadeja, Shubman Gill, Prithvi Shaw and Ishan Kishan are some of the great examples from the Indian team.

Former India cricketer turned commentator Aakash Chopra has picked the best current World XI, which includes players who have played the Under-19 World Cup in the past.

The first name which Aakash Chopra chose for his XI was of Babar Azam, the current captain of the Pakistan senior team. “Babar Azam, you saw him playing drives in the under-19 World Cup, he was looking good. He comes from a cricketing family and it was the first time we got to see his potential.”, Aakash said in a video uploaded on his Youtube Channel.

The next player in Aakash’s XI was Virat Kohli. He stated that when Virat got picked for the India U-19, he was already a part of the Delhi Ranji Trophy team and hence he got a chance to observe Kohli’s game very closely. Aakash admitted that, though Virat was a good player, he never imagined him to become such a big superstar of world cricket.

“When he [Virat Kohli] was selected for India under-19, he was already a part of the Ranji Trophy team and I have seen him closely. The qualities were there, it seemed the boy will do well but I will be honest, I didn’t feel he will do this well.”, said Aakash.

“Steve Smith, if you see his photo as a kid, you will say a leg-spinner had come who could bat a little but he will later become Steve unstoppable Smith, that’s been phenomenal. Kane consistent Williamson – it was the same World Cup where Virat Kohli was there against him.”, Aakash added.

Sri Lanka’s Dinesh Chandimal was chosen as the wicketkeeper of the XI by Aakash. Next, the star commentator picked two southpaws – Eoin Morgan and Shimron Hetmyer.

“I will keep Dinesh Chandimal in the team as a wicket-keeper. Eoin Morgan, World Cup-winning captain. He used to play for Ireland at that time, now he is England’s captain. Shimron Hetmyer – we had seen his ability to hit sixes in under-19 cricket.”, Aakash said.

“Mehidy Hasan Miraz – one of my favorite players, his performance has been very good. Then Chris Woakes, he also made the journey from the under-19 World Cup to the England side.”, said Aakash.

“Then Shaheen Afridi and Kagiso Rabada. These are two other big names whom you see and say – Well done yaar, these boys have done very well.”, Aakash concluded.