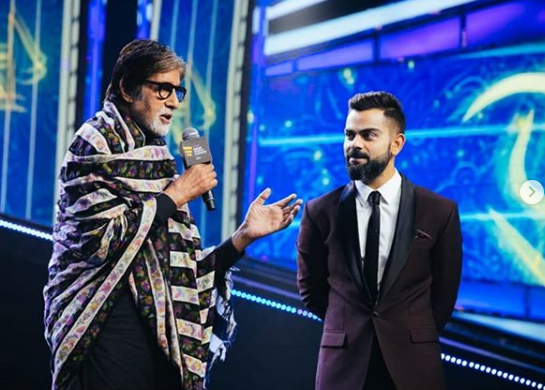 Bollywood icon Amitabh Bachchan is a huge cricket fanatic and diligently follows every match of team India. The Hindi cinema legend recently made a women’s team of India for eternity. Bachchan got this idea after Virat Kohli and his wife Anushka Sharma was blessed with a baby girl a few days back.

Several past and current Indian cricketers now have daughters and many on social media predict that many of them will play for India in future. Now Amitabh Bachchan tagged as the Shahenshah of the Hindi film industry, tried making a women’s team with all the daughters of the Indian cricketers.

The legendary actor is highly active on Twitter and is known for numbering his every tweet. Bachchan uniquely congratulated Virat Kohli and indicated that a future women’s India team can now be made. Bachchan posted a photo which had daughters of India team cricketers such as Rohit Sharma, MS Dhoni, Suresh Raina, T. Natarajan, Ashwin, Pujara, Harbhajan among others and formed a possible women’s team for the future.

Interestingly, Bachchan hinted that MS Dhoni’s daughter Ziva might lead the side and follow the footsteps of her father. The legendary actor also hinted that ‘Future ki Women’s Cricket Team ban rahi hai’, which roughly translates to a ‘future women’s team is being prepared’. This tweet immediately became popular among cricket enthusiasts on the popular micro-blogging site.

"… and Dhoni also has daughter .. will she be Captain ? 🙏'' pic.twitter.com/KubpvdOzjt

Meanwhile, Bachchan’s tweet came after team India’s captain Virat Kohli became a father for the first time. The newborn daughter of Kohli and Anushka Sharma arrived on 11th January 2021. As expected Kohli made sure he shared the news with all his devotees on social media. The Indian captain also requested everyone to respect the privacy of his family.

“As parents, we have a simple request to make to you. We want to protect the privacy of our child and we need your help and support”, the couple said in the statement.