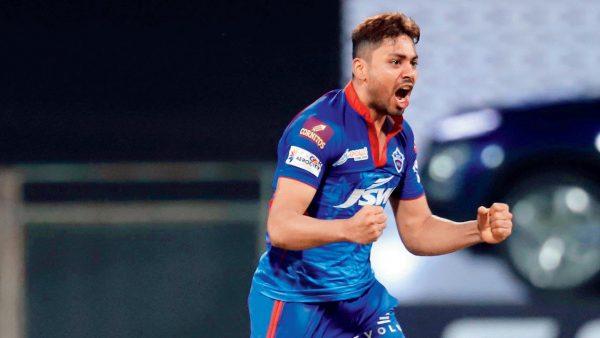 Delhi Capitals fast bowler Avesh Khan has been one of the standout performers in IPL 2021 before BCCI halted the tournament due to COVID-19 cases among the players and support staffs. Having played just one game last season, Avesh Khan made the most of the opportunities that he got in the absence of Kagiso Rabada, Anrich Nortje, and Ishant Sharma during the initial part of the season.

In 8 games, Avesh Khan picked up as many as 14 wickets-the second-most in the season. His economy rate of 7.70 was the lowest among the leading wicket-takers in the competition. In the wake of his brilliant outings, the national selectors picked as one of the four standby cricketers for the tour of the UK including the ICC World Test Championship final.

Speaking to Scroll, the Delhi-based youngster revealed Delhi Capitals’ head coach Ricky Ponting’s ahead of the start of the season. Avesh Khan revealed that Ponting had asked him not to waste the opportunities and focus on one game at a time rather than the entire tournament.

“He told me to not waste the opportunity I was given. Before and after every game, he would sit with me and discuss plans and ways to improve. He wanted me to simply focus on the next game and not look at the tournament as a whole. The shorter my goals were, the more likely I was to achieve them. He encouraged me to back my strengths and follow my instincts,” said Avesh Khan.

However, Avesh Khan is not going gaga over all the praise that has come his way in the wake of the brilliant show in IPL 2021. Instead, the right-arm fast bowler believes that there is still a lot of improvement and that is exactly what he is focused on.

“Things are going well at the moment but there’s always scope for improvement. You can never be perfect but what you can do is keep honing your skills and try to execute your plans during practice. And that’s exactly what I intend to focus on. At the moment, though, I’m not playing any cricket. Just working on my fitness and spending time with family. The BCCI has asked us to not step outside. The England tour is going to be long so I’m enjoying this time with my parents,” he added.