Australian cricketer David Warner has shared a sarcastic post after New Zealand batter Devon Conway was dismissed by Stuart Broad in the first Test match against England at the Lord’s Cricket Ground.

David Warner has always struggled to get the better of Stuart Broad, over the years. He has been dismissed by the veteran England pacer 14 times in Test matches. In fact, during the 2019 Ashes in England, Warner fell to Broad seven times.

Stuart Broad is making his comeback in the format, after being dropped from the England Test team. So far, he has justified his selection in the squad, taking the key wicket of Devon Conway in the first innings. Conway walked out to bat in the fifth over, as New Zealand was reeling at 2/2.

However, the Kiwi batter could not do much, as he lasted only seven deliveries at the crease. In the eight over, Devon Conway poked at a fullish delivery which was around the sixth stump. The ball took the edge and was caught by Johnny Bairstow in the slips cordon. Following his dismissal, Warner posted a sarcastic Instagram story. He wrote, “Devon Conway I feel your pain”. 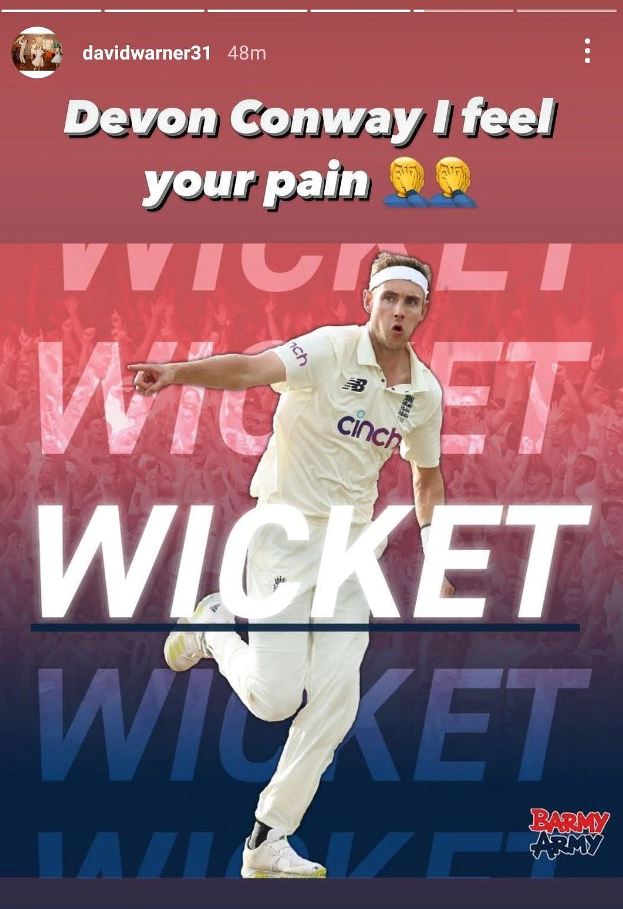 The England pacers made the most of the conditions on offer at the Lord’s Cricket Stadium on day one of the first test match against New Zealand. After losing the toss, England reduced the New Zealand team to 39/6 at the end of the first session.

Debutant Matty Potts has been the pick of the bowlers so far with three wickets to his name. He dismissed Kane Williamson to take his maiden test wicket, followed by Daryl Mitchell and Tom Bundell’s wickets. Veteran pacers James Anderson and Stuart Broad too made their mark in the first session. The duo is making a comeback to the team in the test match.

Anderson sent both the openers, Will Young and Tom Latham back in the hut. New Zealand all-rounder Colin De Grandhomme and Kyle Jamieson began the second session on day one of the first test match.