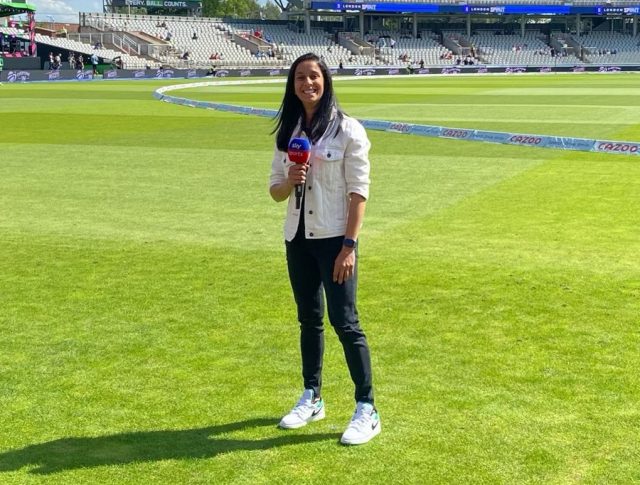 India’s batting sensation Jemimah Rodrigues has taken The Hundred by storm on and off the field. She recently made her commentary debut for Sky Sports during the encounter between Manchester Originals and the London Spirit.

“What an experience!!! Thanks, @SkyCricket for having me in the Comm Box todayPS: Stay tuned… something exciting coming up @markbutcher72 #TheHundred #CommBoxDebut.”

“Well done. You were fab. Good to see you follow the ONLY rule in the Comms box as well.”

Well done. You were fab . Good to see you follow the ONLY rule in the Comms box as well 👏👍🏽

The wicket-keeper batsman further tried to teach Jemimah Rodrigues a commentary box rule but got trolled by her instead. He commented:

Taking the banter further replied, “Interestingly enough, that’s EXACTLY what they told me about anything you say!”

HAHAHAHAHAHA!! Interestingly enough, that's EXACTLY what they told me about anything you say! 😂😂😂 https://t.co/Z4G4HU5r8B

Apart from her fun Twitter interaction with Dinesh Karthik, Jemimah’s cheeky reply went viral on social media. She was asked about her favourite wicket-keeper batsman, to which Jemimah quickly replied as Adam Gilchrist but changed it to MS Dhoni adding that the people in India would kill her if she says otherwise.

Jemimah Rodrigues in dazzling form in The Hundred

Playing for the Northern Superchargers, Jemimah is leading the highest runs scorer tally. She has scored 241 runs in five matches at a staggering average of 60.25 and at a strike rate of 154.48, including three fifties.

Jemimah Rodrigues’ best knock of 92* came against the Welsh Fire. Chasing 131, the Northern Supercharges were in a spot of trouble, losing four wickets for 19 runs on the board. But Jemimah Rodrigues and Alice Richards ensured no further hiccups to take their team home on a challenging wicket.

The Northern Supercharges will next play against the Manchester Originals on August 12 at Leeds.