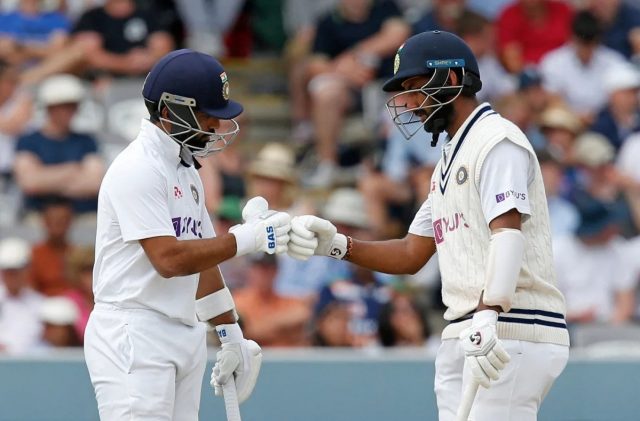 Former India captain Sunil Gavaskar was all praise for two of India’s seasoned batsmen Cheteshwar Pujara and Ajinkya Rahane. The duo is going through a lean phase in their career but made a crucial contribution to India’s test win at Lord’s.

In the second innings, India lost quick wickets and was reeling at three down for 55 runs on the board. Cheteshwar Pujara and Ajinkya Rahane, who has played several match-winning innings, teamed up to get India out of trouble. Pujara approached his innings cautiously scoring 45 runs off 206 deliveries, while Rahane, once set scored a bit faster. He top-scored in the innings with 61 runs off 146 balls.

“They did (play a crucial role). Both of them are what you call low-profile players and not high-profile players. They don’t get the attention that some others do. It may be because of the style of play or whatever but they are invaluable to the team and they brought all their experience to play.”

Sunil Gavaskar further added that Ajinkya Rahane and Cheteshwar Pujara responded to their critics well, by scoring when it was most needed. The former India captain said,

“They (Rahane and Pujara) hadn’t scored runs in the first Test. So it was clear that they were under pressure. They hadn’t scored runs in the first innings as well. There were a lot of questions asked about their place in the team and they responded in the only way they can, by stitching together a partnership when it was most needed. India were only 28 runs ahead and had lost their best batsmen Virat Kohli when these two came together. Fabulous effort.”