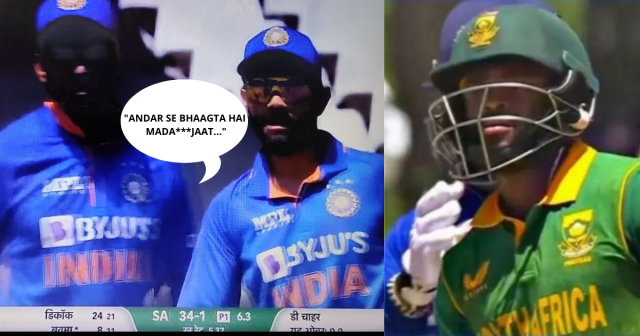 Former India captain Virat Kohli gave an abusive send off to South Africa captain Temba Bavuma in the 3rd ODI at Newlands in Centurion. Kohli and Bavuma have had a couple of exchanges throughout the series.

The incident took place in the 7th over the match. Bavuma miscues a drive towards mid-off and sets off for a single. Surprisingly, he doesn’t run on a straight line and had to pay the price. After passing the bowler, he keeps running wider and that ensured he had to cover more distance.

KL Rahul ran a couple of yards and collected the ball only to hit the bullseye at the bowler’s end to caught Temba Bavuma a couple of inches short. The replays showed Bavuma was clearly out of his crease and received an abusive send off from Virat Kohli.

After reducing South Africa to 34/2, Deepak Chahar inflicted another dismissal to get the better of Aiden Markram, who has been in blistering form with the bat. Reeling at 70/3, Quinton de Kock and Rassie van der Dussen started to rebuild the innings.

They added 144 runs for the fourth wicket to put the home side on top. De Kock, who was awarded the player of the match, continued his good run with the bat bringing his 17th hundred and sixth against India. Dussen also reached his half-century as the runs came easy.

Just against the run of play, Quinton de Kock found Shikhar Dhawan at the boundary before Shreyas Iyer pulled off a stunning catch to reduce 218/5. India continued to peg back this time getting Andile Phehlukwayo runout.

India managed to bowl out South Africa for 287 runs with Prasidh Krishna returning with three wickets.