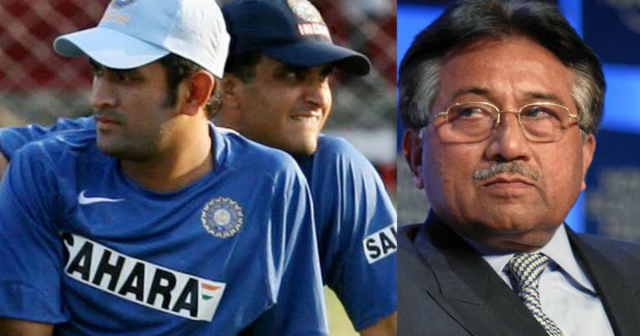 Legendary wicketkeeper-batsman MS Dhoni enjoys a fan following from all over the globe. Former Pakistan president, Pervez Musharraf was one of Dhoni’s fans too. In the post-match presentation in the year 2006, Musharraf even told Dhoni not to cut his golden-streaked hair locks. Hair locks were a trendy thing at that time. The wicket-keeper batsman was among several successful cricketers who made a debut under Dada.

Also, it is a well-known fact that Sourav Ganguly backed Dhoni during his initial run in international cricket. Dada supported Mahi despite few failures in his legendary career. On the 49th Birthday of BCCI president Sourav Ganguly, an old incident involving Dhoni is going viral on social media.

During the India tour of the Pakistan 2006 series, Musharraf was eager to know how Sourav included MSD in the national team.

Ganguly replied to Musharraf’s question by telling, Dhoni was just having a walk near the Wagah border and the Indian team selected him from there.

“I still remember Pervez Musharraf asking me from where did you get him? ‘I told him he was walking near the Wagah border and we pulled him in,” Ganguly had recalled at an event in 2018.

While discussing about MS Dhoni at an event in Kolkata. Dada said Dhoni had a phenomenal career. Also, he opined that Dhoni has opened the gate for many youngsters to get into the Indian team. Ganguly also appreciated Dhoni’s six-hitting abilities.

“He’s another champion… Fantastic career for 12-13 years since winning the World Twenty 20. I wish him (Dhoni) all the luck because we want champions to go on a high, whenever he goes. I still feel he can hit the ball in the stands. He’s a phenomenal cricketer,” Ganguly said