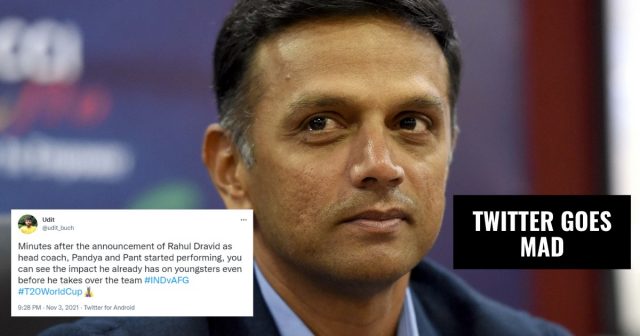 Rahul Dravid has been officially appointed as the next head coach of the Indian cricket team. He will replace Ravi Shastri after the ongoing T20 World Cup. India’s home series against New Zealand will be Dravid’s first assignment with the Indian team. Dravid was the coach of the Indian team that travelled to Sri Lanka earlier this year. His contract will run till the end of the 50-over World Cup in 2023. His contract is reportedly worth Rs 10 crore.

The BCCI in a statement earlier today confirmed Rahul Dravid’s appointment. The BCCI had invited applications on October 26 to appoint Shastri’s successor, whose term gets over after the ongoing ICC T20 World Cup.

The BCCI President Sourav Ganguly reacted to Dravid’s appointment and said that it is a welcome move for the future of Indian cricket.

“The BCCI welcomes Rahul Dravid as the Head Coach of India’s senior men team. Rahul has had an illustrious playing career and is one of the greats of the game. He has also served Indian cricket as Head of National Cricket Academy (NCA) with distinction. Rahul’s effort at the NCA has nurtured several young cricketing talents who have gone on to represent the country at the international stage. I am hopeful that his new stint will take Indian cricket to new heights” said Ganguly.

Twitter meanwhile was elated with the news with reactions pouring in as soon as the news broke. Twitterverse like Ganguly welcomed the move and said that the future of Indian cricket is in safe hands now.

Wishing Rahul Dravid all the best in his journey as India’s head coach.

The wall returns to rebuild. 🙌🏻#Rahuldravid

Congratulations Rahul Dravid for becoming the coach of Indian Men’s Cricket Team. Indian players will be hugely benefitted with his vast experience. Wishing him the very best to take Indian cricket to greater heights.

Welcome to the Rahul Dravid era
May his reign begin 💙
Only good news in very long time, my heart, my man. pic.twitter.com/T6wBVariV3

Congratulations to Former India skipper #RahulDravid on being appointed as the Head Coach of Indian men's cricket team.

Dravid is a committed mentor to nurture our nation’s cricketing talent.

I firmly believe that the team will scale greater heights under his guidance.#Ind pic.twitter.com/v2jndpXJEk

Minutes after the announcement of Rahul Dravid as head coach, Pandya and Pant started performing, you can see the impact he already has on youngsters even before he takes over the team #INDvAFG #T20WorldCup

Meanwhile, Rahul Dravid has also given his first reaction after it was confirmed that he will take over from Ravi Shastri.

“It is an absolute honour to be appointed as the new Head Coach of the Indian Cricket Team and I am really looking forward to this role. Under Mr Shastri, the team has done very well, and I hope to work with the team to take this forward. Having worked closely with most of the boys either at NCA, U19 and India A setup, I know they have the passion and desire to improve every day. There are some marquee multi-team events in the next two years, and I look forward to working with the players and the support staff to achieve our potential” said Dravid.