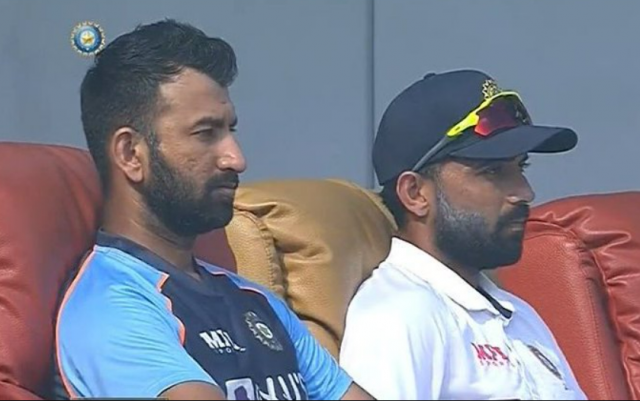 Cheteshwar Pujara and Ajinkya Rahane’s constant failures have come back to haunt them in the Kanpur Test against New Zealand. After getting decent starts in the first session, both were dismissed when they needed to get on with the scoring rate. In the first hour of day four, New Zealand yet again dismissed the senior duo. While Pujara scored 22, Rahane was dismissed for just four.

With Virat Kohli set to return for in the second Test in Mumbai, Indian fans are asking both Pujara and Rahane to be benched in the second Test. Rahane’s low scores in the two innings might see him eventually getting benched as well.

Captain to replace Captain for Next Test?

#INDvNZ This is the final time Rahane Pujara and Saha seen together….@BCCI show some guts and take off the burden.

Hmm so shreyas Iyer, someone who isn't even rated as a test player is about to top score both innings in his debut test
in the side which has experienced 35 year olds"tEst sPecIaliSts" like Rahane and Pujara 👏👏

If India still drop Shreyas for Kohli, and keep Rahane, we deserve what he's been giving to the side with the bat. Not that I am very confident about Shreyas overseas, but somewhere you have to start the process of finding a new number 5.

Very Bad performance from Rahane , Pujara , Mayank and Saha . Its high time to give chances to new player's to perform with players like Jadeja , Rahul , Rohit to gain Some experience from them otherwise the efforts of our bowlers are wasted @BCCI #INDvsNZTestSeries

What do you think is the reason behind Ajinkya Rahane's recent struggles with the bat?#INDvNZ pic.twitter.com/eOINOpOghA

Rahane pujara make way for hitman and kohli and that's how it is, time for both to be dropped going forward! #INDvsNZ

I don't think Kohli or anyone for the matter of the fact will be so courageous to do that.

Pujara can still do it on South african pitches but rahane has a proper replacement called vihari and our first step should be to REMOVE rahane.

Ahead of the Test match, Gautam Gambhir said Rahane was lucky to still stay in the team in Kohli’s absence.

“I have no concerns about my form. My job is to think about how can I contribute to the team and contribution doesn’t mean you need to make 100 in every game. 30-40 runs or 50-60 runs in a crucial moment is a very important contribution. I always think about the team and never about myself that, ‘What lies ahead for me?’ or ‘What will happen in the future?’ I think I am very fortunate and grateful, it’s an honor for me to lead the country. So not too much bothered about what will happen. What’s there in the future will happen. My focus is to give my best in a particular moment and that’s what I am going to try” said Rahane

Before Rahane and Pujara were dismissed Kyle Jamieson dismissed Shubman Gill for one. The Indian opener crafted out a half-century in the first innings but was dismissed early in the second innings.

Veteran Indian wicketkeeper-batsman Dinesh Karthik meanwhile, said that a target of around 275 will be difficult for the Kiwis to chase down on the final day.