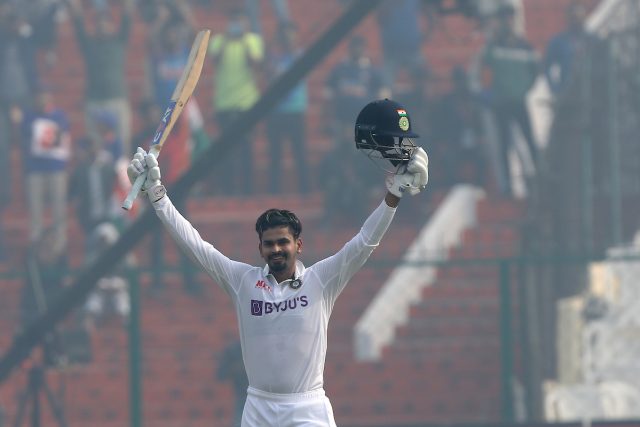 Indian newest test debutant Shreyas Iyer slammed his maiden century in the ongoing test match against New Zealand at the Green Park in Kanpur. The right-hander scored 105 runs, off 171 balls, including 13 boundaries and a couple of sixes.

India won the toss and chose to bat first. They were in a spot of bother after losing their top four for 145 runs on the board. However, Shreyas Iyer got together all-rounder Ravindra Jadeja to build a solid fifth wicket-stand. The duo added, 121 runs partnership before Jadeja was dismissed, scoring a fifty. Shreyas Iyer continued his innings and reached the three-figures mark in the 92nd over of the game. He took two runs off the first delivery of the over, gently dabbling the ball behind point.

Shreyas Iyer wasn’t the first choice to play in the test, however, KL Rahul’s injury earned Shreyas his test debut. He was handed the cap by the Legendary cricketer and former India captain Sunil Gavaskar. The 26-year old became the 16th Indian batsman to score a century on Test debut, and third to so against New Zealand. He also became the 10th India to score a debut test hundred in home conditions.

Here is the list of Indian cricketers who scored a century on their Test debut at Home: