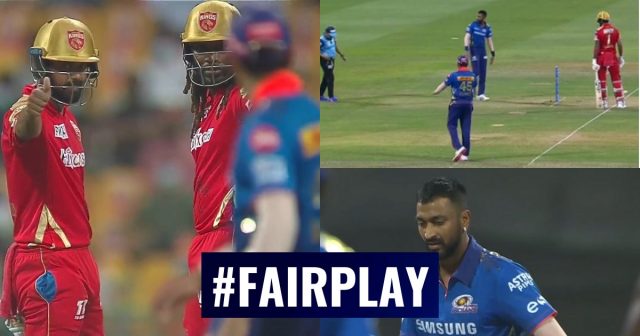 Mumbai Indians all-rounder Krunal Pandya showed tremendous fairplay as he denied appealing against KL Rahul’s run out. Mumbai Indians are playing a crucial game against Punjab Kings in match 42. It’s a must-win game for both teams to stay alive in the race for the playoffs.

In the sixth over of Punjab Kings innings, KL Rahul was hit by Chris Gayle as he hit the ball straight back to him. In the process, the ball ricochets off Rahul to Krunal who’s quick to whip the bails off. However, Krunal denied appealing against Rahul and did not appeal for the run out.

KL Rahul got a life early on his innings but his happiness was short-lived. The Punjab captain was dismissed by Kieron Pollard in the seventh over of the Punjab innings for 21. He was caught at 45 by Jasprit Bumrah to give Pollard his 300th T20I wicket.

Rahul had scored over 400 runs against Mumbai in the last five matches before this one. He also scored a hundred against the opposition back in 2019 at the Wankhede.

Mumbai Indians bowlers have taken quick wickets and at the moment are having an upper hand over their opposition. Earlier in the game, Mumbai Indians won the toss and opted to bowl first.

“As a team we do understand where we stand at the moment and we also understand that we haven’t played to the best of our potential. We know where we’ve made mistakes and hopefully, we can correct it tonight. Because of where we stand at the moment, we have had to make some difficult changes which we didn’t want to do. A couple of changes: Ishan goes out and Tiwary comes in and NCN comes in for Milne” said Rohit after winning the toss.

“Don’t mind batting first and we need to assess what a good total would be. Not much to fix, it’s important to realize that we are a team that has capitalized on good starts. We haven’t handled pressure really well. But when our backs are against the wall, we have done really well. We need to be a bit brave and trust our instincts. We need to trust our basics and not worry about the results. Just one change: Mayank has a stiff back and so he misses out. Mandeep Singh comes in.” said Rahul at the toss.

Meanwhile, in the DC vs KKR game, Ravichandran Ashwin got into a heated argument against Tim Southee and KKR skipper Eoin Morgan.

The incident took place on the first delivery of the final over bowled by Tim Southee. Ravichandran Ashwin came down the track and decided to hit a pull shot and go for a six. The ball went up in the air and Nitish Rana took the catch at the deep backward square.

And, soon after his dismissal, some heated words were seen getting exchanged between Tim Southee and Ravichandran Ashwin followed by Morgan’s involvement as well. However, Dinesh Karthik then decided to intervene and managed to part away both Morgan and Ashwin from each other.