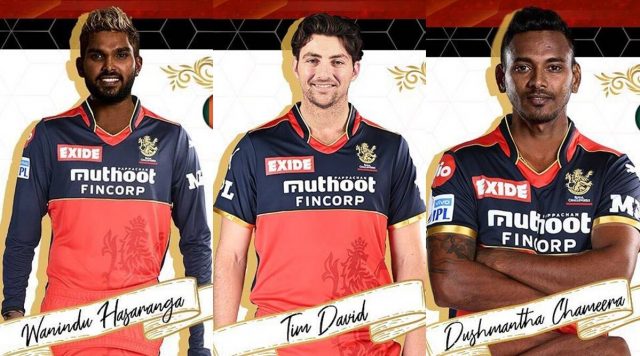 IPL 2021 UAE leg will be played from September 19 to October 15. Matches will be held at the three premier venues, Abu Dhabi, Sharjah and Dubai with all teams playing at all three venues. The time for submitting replacements are over an all the franchise made their pick in the knick of time. As many as nine players have been replaced with new players being roped in by the various franchises.

Among the names who have will miss out on the UAE leg includes, Adam Zampa, Pat Cummins, Jofra Archer, Andrew Tye amongst others. Meanwhile, Adil Rashid, Wanindu Hasaranga, Tim David are amongst names who will be making their IPL debut in the remaining half of the tournament. Rashid for instance did not get a franchise despite putting his name in the initial list of players. However, he will be playing for Punjab Kings as a replacement for Jhye Richardson who will be missing the remaining leg due to personal reasons.

In this article, we take a look at all the overseas players who will be making their debut in IPL 2021 in the UAE leg.

Hasaranga’s addition to the RCB squad has been nothing short of a fairy tale story. He had a brilliant white-ball series against India recently picking up nine wickets in the T20I series including four in the final. He proved to be a difficult bowler for the Indian batsmen to read which is why he became successful.

The conditions in UAE will be tailor-made for his kind of bowling. We saw how the pitch started spinning once it dried up in the second half of IPL 2020. With Yuzvendra Chahal being their specialist spinner, Hasaranga can be an ideal foil for him with the cricketing world still not having seen much of him. The Lankan spinner also expressed his admiration for the league and his rejoice in finally being a part of it.

Chameera is the second player to be signed up by RCB in place of Daniel Sams. The Lankan pacer has enough skill to work with which can be critical in the Arab nation. With Umesh Yadav, Navdeep Saini, Mohammed Siraj and Harshal Patel, Chameera can be an ideal addition as it also maintains the variety in the pace attack.

Rajasthan Royals have roped in New Zealand wicket-keeper batsman Glenn Phillips as Jos Buttler’s replacement for the second phase of IPL 2021. Phillips, who is currently with the Barbados Royals in the Caribbean Premier League (CPL), which begins next week in the West Indies, is scheduled to join the Royals squad in the UAE on September 19. So far, Glenn Phillips has represented New Zealand in 25 T20Is and also had stints in England’s Vitality Blast as well as the Hundred and in the CPL.

Garton is the fourth player signed up by the Virat Kohli-led franchise. The youngster replaced Kane Richardson in the line-up. Garton is a promising young all-rounder who bats left-handed and bowls left arm. George plays his domestic cricket for Sussex. He is a product of English U-19 cricket having played in the 2016 World Cup in Bangladesh. He was also called as a short-term cover ahead of the first 2017-18 Ashes Test.

David became the first player from Singapore to be playing in the IPL. He comes in with a reputation of being a hard-hitter. Tim has played in the Big Bash League, PSL, and T20 Blast in England. He has played 11 T20Is for Singapore scoring nearly 500 runs and picking up five wickets.

Nathan Ellis is one of the two players roped in by Punjab Kings ahead of the UAE leg. He replaces Riley Meredith in the squad who has confirmed his unavailability for the remaining half of the tournament.

Ellis took a hat-trick on his T20I debut for Bangladesh. He also has been drafted in Australia’s T20I squad as a travelling reserve. Punjab won the race as two other franchises were keen to rope in the Australian youngster.

Rashid completes the list of players who will making their IPL debut in UAE. The veteran England pacer replaced Jhye Richardson in the squad who will not be playing the UAE leg.

The UAE conditions are perfect for Rashid who has played in various T20 leagues. Punjas already has two young spinners in Ravi Bishnoi and Murugan Ashwin. With Rashid coming in, they will form a formidable trio and can pose problems for opposition batsmen.

Also Read: 3 RCB Players Who Can Dominate The UAE Leg of IPL 2021

“He Is Very Good As Commentator, But In The Team, I Wouldn’t Pick Him”...