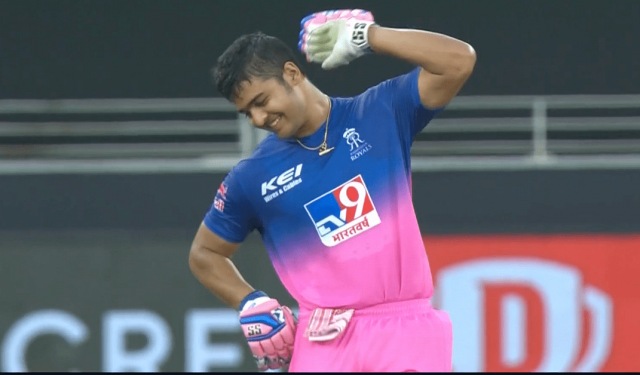 Rajasthan Royals cricketer Riyan Parag will be available to play the second leg of IPL 2021 with the Royals. He played the first seven games for the Royals scoring 78 runs and picking up a wicket. He is seen as a young exciting prospect for the team and someone to look forward to in the future.

Riyan Parag being a young cricketer himself understood what it means to surprise young fans. He took some time out and went to meet a fan named Aman at his house. On watching his favourite cricket stand in front of him, Aman could not hold back his excitement and jumped out f joy and ecstasy.

Pagar also joined in for a little bit of Bihu dance with the young fan. Aman said that he did not recognise that it was Riyan with the mask on and only after he removed the fan was he able to recognise him properly.

The video shows how Riyan surprises Aman and goes to spend some time at the “Junior Super Royal’s” house. He not only sees his paintings and mementos but even acknowledges the fact that he has the painting of Virat Kohli. ” What do you get to be the first Junior Super Royal? Spoiler – You’ll wish to be the next one! #RoyalsFamily | #HallaBol | @ParagRiyan,” the video was captioned.

😱 What do you get to be the first Junior Super Royal? 📹

Meanwhile, Rajasthan Royals are placed fifth on the points table having won three out of their first seven games. They resume their campaign against Punjab Kings on September 21 and play their last game against Kolkata Knight Riders on October 7.

Sanju Samson resumes as the skipper of the side in the UAE leg. He was below par with his leadership skills and batting skills as well in the first half f the tournament. The absence of Buttler and Stokes from the lineup will mean that he will have to take additional responsibilities with the bat.

Samson scored 277 runs in the first seven games averaging 46.16 including a century against Punjab Kings in the side’s very first game.